The Portuguese government has claimed a “duty of neutrality” for refusing to subscribe a joint letter to the European Commission, signed by 17 Member States, condemning the recently approved Hungarian law which is discriminatory against LGBTI+ people. Fabíola Cardoso, MP for Left Bloc, stresses that "Portugal needs to quickly reverse its position.” 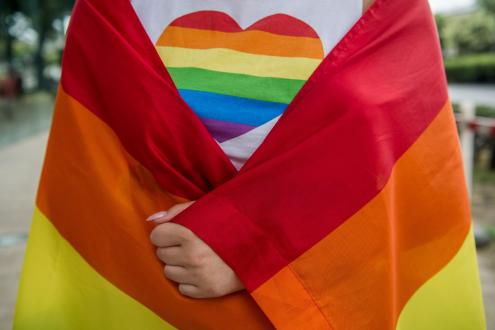 Participant on the LGBTI+ demonstration in Budapest, 2018. Photo: Zoltan Balogh/EPA

The Portuguese government has refused to subscribe a joint letter to the European Commission, signed by 17 Member States, in which the executive is urged to “use all the instruments at its disposal to guarantee the full respect of European law”, before a Hungarian law clearly “discriminatory against LGBTI+ people”.

The recently approved legislation in Hungary includes a set of measures that equate homosexuality with paedophilia, prohibiting the dissemination of content that “shows or promotes sexuality, sex change or homosexuality” to persons under 18 years of age and restricting the access to sex education in schools.

“On the occasion of the celebration of the International Lesbian Gay Bisexual and Transgender Pride Day the upcoming 28th June, and in the light of threats against fundamental rights and in particular the principle of non-discrimination on grounds of sexual orientation, we express our attachment to our common fundamental values, enshrined in Article 2 of the Treaty of the European Union. It will be a day to remember that we are diverse and tolerant societies, committed to the unhindered development of the personality of each one of our citizens, including their sexual orientation and gender identity”, the letter reads.

Despite stating that she agreed with the content of the document, the Portuguese Secretary of State for European Affairs pointed out that Portugal did not subscribe the open letter due to a “duty of neutrality” stemming from its current status as president of the EU Council.

“I did not sign the document because we currently hold the presidency, and we have a duty of neutrality. At the same time the debate in the Council was taking place, and we play the role of an “honest mediator” which comes at a price: the price is that we are not able to sign the document at present”, stressed Ana Paula Zacarias.

The Portuguese government must “quickly reverse its position”

For Fabíola Cardoso, MP for Left Bloc, “there can be no neutrality in the face of human rights violations”.

“Neutrality towards discrimination, illegality, violence, hate, oppression and silence of a group of people is called complicity. There is no neutrality in the defence of fundamental rights”, she stressed.
Fabíola Cardoso argued that “Portugal must quickly reverse its position in this matter.”

Marisa Matias, MEP for Left Bloc, also lamented that the Portuguese government has decided “to have as a mission to be ‘neutral’ in relation to the Hungarian government and its attacks towards the LGBTIQ+ community”.

“Sad way to end the EU presidency…”, wrote the MEP on her social media.