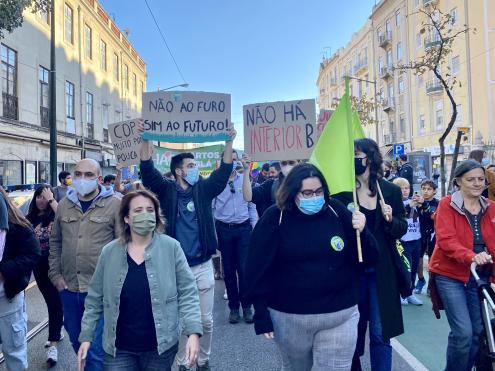 Catarina Martins, Left Bloc’s national coordinator, accompanied the Lisbon march, where she described the COP26 summit as a “disappointment” and criticised world government for going ahead with mining concessions “in defiance of the populations”.

However, she recalled that the recently approved Climate Framework Law in the Portuguese Parliament is the result of the climate movement, as “it defines, for example, that we cannot have oil or gas prospection in Portuguese territory. Something that a few years ago looked like it would take place and the climate movement managed to put the brakes on”.

Despite COP26 being a disappointment, Catarina Martins believes that “there is still time for effective measures. Whoever thinks that the strength of environmentalists is worthless is wrong. It is these climate activists who are making a difference all over the world. They are waking up the world to the need for effective measures.”

In a recent opinion article, Left Bloc MP Joana Mortágua, made serious criticism regarding the Portuguese government’s attitude towards the COP26: “Greta Thunberg was there, and once again angered many international leaders with accusations that COP26 would be nothing but empty promises. One of the critics was the environment minister João Matos Fernandes, who revealed he was less than impressed with the Swedish activist’s statements, who he accused of wanting to eliminate institutions and of not being as passionate about democracy [as he was] for having said that “leadership is in the street”.”

Long gone are the days when Matos Fernandes wrote letters wishing young Greta a warm welcome to Lisbon: «We are grateful for your activism, as a way of raising awareness among everyone, young and old generations, of the greatest challenge of our times». And then Matos Fernandes listed the achievements that make Portugal a green and carbon neutral country.

Joana Mortágua concluded that the “«green example» presented by Prime Minister António Costa at COP25 missed the call this time and joined the absences of China, Brazil and Russia. I understand that the Minister of Environment Matos Fernandes does not like it, but perhaps young Greta is not that far the truth.”