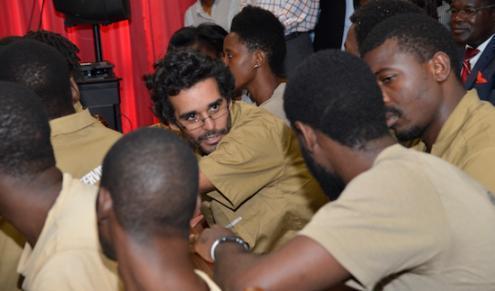 Some of the activists under trial in Angola

The trial against the 17 activists arrested in June in Angola came to an end on March 28th 2016 with prison sentences ranging between 2 and 8 years in jail for all of them. Yesterday in parliament the Left Bloc and the Socialist Party both presented motions condemning political oppression in Angola with were voted against by the Communist Party (PCP), the Social Democrats (PSD) and the Social Democratic Centre (CDS).

The Left Bloc, the Green Party (PEV) and the Animals and People’s Party (PAN) voted in favour of both motions, the Socialist Party abstained in the Left Bloc's motion, but 17 MPs voted in favour. Catarina Martins commented on the Communist Party's continued support of the Angolan dictatorship through the following tweet, wich reads "If one day we are called to defend 17 young communists arrested in Hungary or the Ukraine for reading a book, we won't remain silent either".

The Left Bloc's motion called for the release of the activists under arrest, condemned their arrest and asked for the process to follow the Angolan law, according to which the people have the right to peacefully oppose the authorities. The activists were illegally detained, abusivelly mistreated and had their rights restrained, and went on hunger strike to call for attention on the injustice of their process.

On Januray 8th, the Left Bloc had presented another motion about oppression in Angola, demanding a resolution to the trial of 15 activists arrested in June. That motion argued that ‘it is necessary that this winding process, that seeks to detain and punish those who criticise José Eduardo dos Santos’s government, be stopped and brought to an end. The government has been directly interfering throughout the process in order to indefinitely prolong the hearings.’