Even before its official approval, ministers, leaders, diplomats and others, were already warning against setting expectations too high for the EU’s real ability to follow up on citizens’ demands. By Luís Fazenda and Marisa Matias. 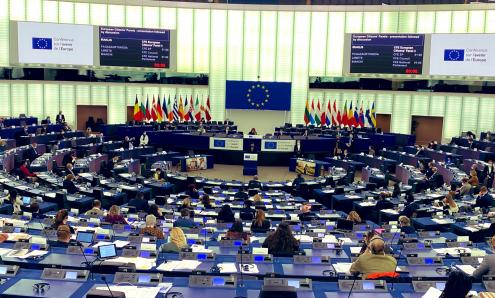 The Conference on the Future of Europe has started, and the initial buzz around it seems to disappear as the process advances. The voices of the critics go much beyond the regular ones. Even before its official approval, ministers, leaders, diplomats and others, were already warning against setting expectations too high for the EU’s real ability to follow up on citizens’ demands. In fact, as the Council was never too thrilled with the idea of the conference itself, the Commission appeared to be too focused on its technical details and the Parliament trying to be noticed in the process, the only ones calling for the conference seemed to be the European citizens themselves. A special survey of the Eurobarometer1 carried out in October and November 2020 in all 27 Member States showed that 3/4 of the Europeans consider that the Conference will have a positive impact on democracy within the EU. Six out ten European citizens said that the coronavirus crisis had made them think on the future of the Union, and 92% considered that EU citizen’s voices should be heard for the decisions to be taken on the future. The results of the survey even showed that 51% of the Europeans would like to get involved themselves. On their expectations, the answers were mainly having comparable living standards (35%) and stronger solidarity among Member States (30%). As for the challenges ahead, climate change was identified as the major challenge for 45% of the citizens, followed by terrorism (38%) and health related risks (37%). If nothing else, the will of citizens clearly shows that the Conference must not end up as a top-down event in which self-proclaimed European politicians come up with the results and it can only be a success if citizens, civil society and trade unions are given a say and are involved in the debate from the outset. The starting is not bright, citizens were given the right to participate in the plenary debates but without voting capacity…

While the written aim is to create a new public forum for an open, inclusive, transparent and structured debate with Europeans around the issues that matter to them and affect their everyday lives, it seems that the European leaders seem to have different opinions and that the outcome an be anything or nothing. On it’s opening the Portuguese Prime Minister, at the time the Portuguese held the Presidency of the EU, said that the Conference should send “a message of confidence in the future that we want to convey to all citizens” and that the emphasis should be on social issues. While Europe could reach for the Moon or Mars, it should prioritize the oceans, were also his words. On other hand, the President of the Parliament insisted on the urge that the conference should consider to grant the right of legislative initiative to the Parliament and the President of the Commission Ursula von der Leyen highlighted the entire exercise as the possibility to bring institutions closer to the people they serve.

What do we know now? It seems quite obvious that putting citizens first it’s urgent, and that radical change is required if we fight for a Europe that is democratic, transparent and accountable. If examples were needed, the Covid-19 vaccination fiasco showed again the need to bridge the gap between European institutions and European citizens. The European project structurally lacks democracy, transparency and accountability, if not dealing with these departing conditions, the Conference for the Future of Europe will be nothing but another communication gadget. But the current problems can’t be subsumed to the democratic gap, it’s the very nature of the European project which is at stake. It’s the very nature of European treaties and the rules on competition, free trade, and market dogmas that block the future of Europe. Again, the pandemic crises and the economic recession have again demonstrated how unfair and inefficient the European project can be. What Europe needs it’s a radical change for the people and for the planet, can we expect something of that dimension from the Conference?

A first important step would be a people focused project, a space open to discuss Treaty changes and a tool to ensure genuine citizen involvement. Symbolic reforms won’t be enough: if we want to fight climate change, reduce inequalities, and restore cohesion within the EU, new treaties are required. Ignoring these demands can turn the Conference into a parody of democracy. The imminence of the bird of a paper tigre is there as the possible main outcome. If the European leaders insist to follow such path, the Conference might be itself another demonstration of the EU incapacity to deal with challenges ahead.

The core of problems of EU have been identified for long time now. The special survey shows how EU citizens are tuned with what is needed when identifying issues such as increasing leaving standards, stronger solidarity and climate change within their main concerns and EU’s future challenges. Answering to them, and involving them, requests concrete proposals, namely: a new economic governance model, which, amongst other measures, can overcome the dogmatic austerity approaches and entails the capacity of direct funding to the Member States; a true energetic transition towards the aim of having clean and affordable energy to all; the promotion of a true solidarity within EU, including proper measures to ensure that migrants and refugees are properly welcomed; the end of tax completion and of tax heavens as a mean to promote tax justice and redistribution across EU. These are the tasks ahead, not only of the Conference but of the whole European project.