Arrow Global, the London-based debt purchase company that leads the Portuguese market, has announced that it will be hiring the former finance minister, stressing the "wealth of experience" that she will bring to the company. 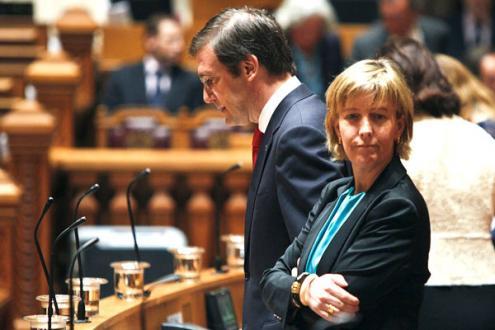 "I am delighted that Maria Luís Albuquerque will be joining the Board as a non-executive director. As a serving member of the Portuguese Parliament, who has held senior finance and treasury positions in the Portuguese public sector, Maria Luís will bring a wealth of international and debt management experience and will complement the existing experience of the Board and Arrow Global's expansion into new geographical markets and new asset classes", said Jonathan Bloomer, Arrow Global's chairman, in a press release.

In 2015, Arrow Group bought Whitestar and Gesphone, which operate in the same market in Portugal. Whitestar is involved in managing Banif's non-performing loans. According to the Banif Mais SGPS 2014 annual report, the Banif group bank, while in public control, sold its portfolio of Portuguese and Spanish loans to Arrow Global Limited and Arrow Global Luna Limited.

In a document marked as "confidential" but available on the internet, the company says it holds €5.5bn in its Portuguese debt portfolio, with banking clients including Santander, Banif, Millennium BCP, Banco Popular, Montepio, Finibanco, Crédito Agrícola, Cofidis, among other important financial sector companies.

The Left Bloc spokeswoman has responded to the hiring of the former FinMin and current PSD MP Maria Luís Albuquerque, saying that the situation is "unacceptable". "There are no words to describe it", Catarina said. “Maria Luís Albuquerque has just been hired by a company that profits from national banks’ non-performing loans.”

"It is a company that made profit from buying Banif's credit portfolio while the financial system was protected by Maria Luís Albuquerque. Arrow Global is also the owner of Whitestar, which is currently evaluating the Banif financial assets that were not wanted by Santander and remained in public hands", revealed Catarina Martins.

The Left Bloc's spokeswoman said that the former minister "is going to work at a company that has profited from her actions regarding Banif, by dragging out the situation, and can now pick and choose to continue profiting from the way financial assets that belong to the State are managed".

"There are many questions in need of an answer" facing the parliamentary committee of inquiry on Banif that has just started its work, added Catarina.

Last December, the European Commission and European Central Bank imposed the resolution of Banif bank and the sale of its healthy assets to Santander in exchange for €150m. In 2013, the taxpayers injected €1.1bn into the bank and the government made appointments to its board of administration. With the bank resolution process, the public treasury has lost another €2.2bn.