Motion B - More Bloc to face the forthcoming times

Here is the second of the three motions that shall be discussed in next weekend's national convention. Motion B had 112 subscribers, the first of which is Adão Campos Júnior. 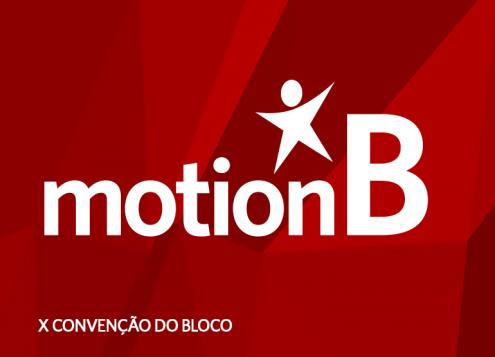 The 10th Convention of Left Bloc is justified by the need to deepen the political line that has been set since the legislative election, which doesn’t match with what was approved in November 2014 in the last Convention.

Two fundamental reasons led us to stray away from the process of a common motion:

- It is in that plurality and in all the organs that we want to build the necessary synthesis for a more democratic Bloc.

- We want to encourage a more democratic Bloc built in the necessary synthesis within that same plurality and in all the organs.

The last legislative and presidential elections allowed us to confirm a new generation of leaders – women, young and combative.

We benefited, with tactical correction, from extraordinary circumstances which allowed us to go from a challenge to the PS [Socialist Party] to a parliamentary agreement to support a PS Government.

Practice revealed the virtues of a position based on a minimum programme to improve living conditions of the majority of the population, framed in the combat combat against austerity.

Left Bloc benefits today of a large popular sympathy. In this conjuncture, the deepening of this political orientation is a central axis of the political intervention.

FOR A GREAT IMPULSE

This is the most propitious time, receiving new party members and opening the doors to those that come to us, to enlarge implantation and to intensify the intense democratic character that Left Bloc must assume.

We face the 2017 local election with programmes of protection of the populations and a frontal fight against local [private] interests. Respecting the autonomy of the municipal structures of the party, we do not put aside any possibility of intervention: whether having our own electoral lists, integrating our candidates in unity electoral lists, converging with social activists, or within in coalitions of left parties.

We want to promote a culture of active participation and citizenship.

8 measures to adapt the organization to the challenges we face

• Provide all the support to the bases, giving a new orientation to party officials to follow and support the regions and local structures.

• Reform and extend the network of party offices to make them more dynamic.

• Structure the work by thematic areas in a collective coordinating perspective.

• Enhance the bloco.org website, turning it into an area reserved to the inner affairs of the party, creating a digital network to query party members and to disseminate information.

• Reorganize and expand inclusive and articulated work groups with the parliamentary group in order to prepare consistent sectorial and thematic answers.

• Create a school for political training.

• Ensure that the Left Bloc budget will reflect these priorities from 2017 onwards.

Bloc's political intervention should lay in the articulation between the Political Commission and neighbourhood or workplaces organizations, making it compatible with the Parliamentary Group.

Given the pressure put on this government, deepening the agreement with PS (Socialist Party) is a complex matter. The effort to find solutions which may carry on the dismantling of austerity implies greater capability to build alternatives.

We aspire to achieve a society which ensures wide protection of the civic and social rights. The fight against unemployment and precarious work is central.

We shall carry this parliamentary agreement as far as possible and we shall do everything possible to keep it, rendering it into concrete measures.

However, we know that the right-wing parties and EU will try to affect the Government action, demanding more austerity.

If the present government drifts off course, we shall not serve as a backboard to government solutions against labor protection, rising incomes and workers’ rights, or to the protection of the most vulnerable.

In this circumstance, the answer will take into account the possible fractures in PS (Socialist Party), being also necessary to attract other sectors from the socialist left and independents.

It is necessary to keep on searching for convergences with PCP (Portuguese Communist Party).

In that convergence path, Left Bloc positions itself in the centre and commits itself to overcome sectarian bickering which have barred ways on the left area.

Only the mass movement ensures the achievements that the current balance of parliamentary forces allows to reconquer. Left Bloc must contribute to its promotion and raise citizen mobilization around concrete demands.

We defend working rights, the of public services of towards proximity, particularly inland, with the reopening and expansion of schools, health, judicial and finance/tax networks.

The incentive to development the productive sector aims to diminish external dependency, to increase social forms of property and to fight unemployment and job insecurity.

We defend the reuse of commercial and industrial abandoned areas. The state must give priority to cooperatives and other forms of social economy.

The target of the EU strategic Community Funds shall be the fight against poverty, unemployment, and the decrease of the asymmetries between coast and inland territories.

Left Bloc aims to contribute to invert this reflux cycle, as an answer to the austeriterian pressure and disobeying the EU dictates.

The technological and scientific development should be at the service of environmental sustainability.

We defend the decrease in the use of fossil fuels, pesticides and herbicides, the reduction of the production of contaminating materials, the interdiction of nuclear, the non prospection of oil, the study on the effect from polluting industries over workers and population, as well as the focus on the protection of water resources and promotion of biological agriculture.

Left Bloc underlines the importance of environmental movements, integrating itself in the fight for the development of an alternative civilization focused on the vision of nature as a pillar of economic and social development, operating a synthesis between an anti-capitalist ecology and a non-productivist socialism.

We propose a wide movement with the view to rethink Public School as an inclusive and democratic space.

We defend the diffusion of cultural products by all sorts of channels, the universal access to knowledge and the preservation of collective memory as activelly democratic practices.

The hegemonic dispute in culture justifies that Left Bloc organizations pay special attention to an intervention in the sector, promoting critical thinking networks against ideological inculcation from the right-wing sectors.

Left Bloc made the difference by presenting a female triad in the leadership.

However female visibility in politics can not mask salary inequalities, at the top of hierarchies, in gender division of work, nor on domestic violence, proving that feminism is still a priority.

The feminist agenda must be present in all combat fronts against changes promoted by global capitalism.

In the same way should be treated other causes: LGBT, racism, xenophobia, with actions that will lead to a real change of mentalities.

International capitalism crisis is not over.

The TTIP treaty threatens food sovereignty and leads the appropriation of common goods by the global unregulated commodification.

The offensive against progressive forces in Latin America, the war in Syria and the expansion of violence and religious intolerance constitute very worrying political and military outbursts, demanding solidarity from us with old and new causes, and the exit from NATO.

Abolishing the Fiscal Compact is essential. The management of the refugee crisis, the agreement with Turkey or the threats to free movement of people in Europe are a serious drawback in human rights. It is worrying the ground gained by the xenophobic extreme-right.

In this context, and in the framework of the single currency, the great question is the ability to rebuild a jointly responsible and democratic European model that respects the sovereignty of each people and sharing of resources. Only Europe can rebuild itself.

Although the growth of left parties is encouraging, the difficulties are still enormous and the achievement of social majorities is slow.

Movements that question the effects of the European diktat and the internal differentiation processes in social-democratic parties can not be dismissed.

The agreement with PS (Socialist Party) is a good international example of that scenario and thus are initiatives around concrete questions in convergence with a constellation of movements and groups of mobilized citizens against austerity.

On the fight against financial pressure over the debt demanding its renegotiation, the changes in government policies, supported by social movements, will allow to shape an European front against austerity, necessary condition to make a shift in policies and invert the correlation of forces in Europe.

We must overcome shortcomings in information circulation as well as the depreciation from the National Board by the Political Commission.

Initiatives must be previously discussed regionally and locally.

Left Bloc needs more adequate mechanisms to flatten the pyramidal structure that drifts away the bases from the Direction, for only that change can mobilize members and increase the participation rates in plenaries and internal elections. Left Bloc needs robust and transparent voting systems and to value referendum.

The struggle for the control of the party apparatus impoverishes intervention capability, marginalizes competences and undermines internal democracy.

Agreements external to the statutory consigned organs, that may condition these same organs, are dispensed for they may contribute to disseminate the idea that all is decided by the party cupolas.

• The quota, though symbolic in case of difficult economic situation, must be paid.

• The electing or referendary acts are presential.

• In the composition of elective organs proportionality must prevail.

• The meetings drafts must be distributed, 2 weeks max. after they have taken place.

• The National Board Mail must be distributed again to members.