In the video below, Left Bloc's MP José Soeiro presents eight concrete ideas that can make a difference in the fight against precarity.
José Soeiro 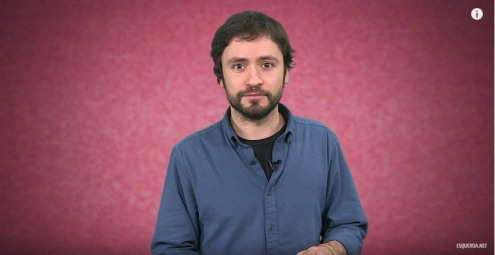 The video is available here (with English subtitles) and the transcription can be read below.

"Instability is now the rule in today’s labour market. But it doesn't have to be. It can be fought. Here are eight concrete ideas that can make a difference.

Most so-called “service providers” should have an employment contract. Freelancing hides a real employment relationship. But crime pays. Offending employers should be punished with large fines and they should be denied public subsidies and benefits.

2 - Improving the law against precarity

Since 2013, the reporting of false autonomous worker situations has not relied only on workers. The Working Conditions Authority must make inspections and the Prosecutor’s Office must take action against employers. The new law – 63/2013 – has seen more than 1800 false autonomous workers have their rights recognised. This mechanism now needs to be applied to false work placements, grants and volunteering. Unions and other bodies that report situations, such as precarious workers’ associations, should be able to monitor the process and represent workers.

In 2017, a new rule will enter force that means contributions to Social Security are based on what people actually earn. But we need more: autonomous workers should have better unemployment and sickness protection and protection for bringing up children. Persecution for debt needs to come to an end, with flexible, realistic payment plans.

Work placements are expensive for the state and companies take advantage of subsidies to use cheap workers, who they replace every 9 months. Work placements have become a trap of instability and a waiting room for unemployment.

Companies should be obliged to hire at least 1 in every 2 interns they have. The money spent on work placements should be used to create real employment. Complaints have increased in recent years but the number of inspections has gone down. The authority must have the means to ensure that the law is followed. And it should check state, public administration and job centre work placements.

6 - To end the forced labour of "introduction to employment"

“Introduction to employment” contracts are, in most cases, outright abuse. For an €80 grant, people take a permanent employment position and are certain that they will never have a contract. This disgraceful situation must be brought to an end.

7 - The state must set the example

In recent years, the state has become the biggest employer of precarious workers, following restrictions on recruitment in the civil service and at public companies. A full survey of these situations will be carried out over the next six months and is urgently needed. It must be the first step in integrating these people from next year onwards.

8 - Refund solidarity and labour as a collective right

In 2011, there were more than 1,200,000 workers covered by collective labour agreements. In 2014, this number fell to less than 250,000. Employers hold all the cards. Only collective labour agreements give strength to the weakest people in the employment relationship. These measures are just a first step. But they are possible and they are possible right now."