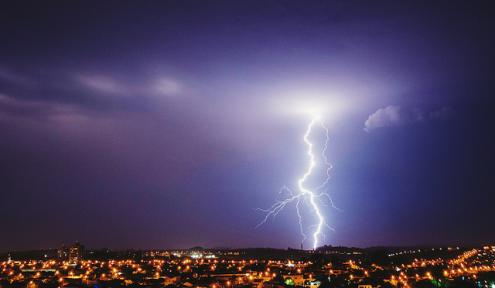 After receiving an astronomical €661bn since 2008 in public aid, the banks are now low on capital (some of their assets are worth less than declared or, in other words, are toxic) and are having difficulty paying their short-term liabilities.

The graphs below show the clearest symptoms of those difficulties. The first two show how the value of “CoCos” held by some of the major European banks has fallen: Deutsche Bank, Santander, Unicredit and Banco Popular (but the same applies to BNP Paribas). In other words, the main banks of Spain, Germany, France and Italy are staring into the abyss. 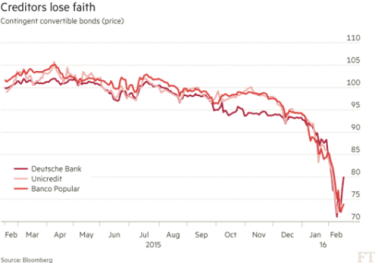 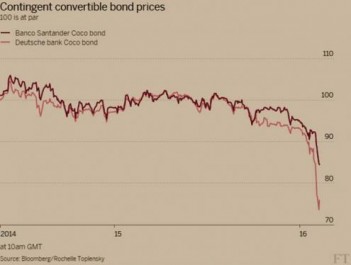 “CoCos”, or contingent capital bonds, are debt instruments that were created in 2013 in response to new international regulations in order to work around restrictions that were imposed on capital ratios. They are debt securities that can be converted into capital in the event of a tragedy. In the meantime, they receive a high rate of interest, which corresponds to the fact they are considered high risk.

As we can see, the value of these debt instruments has been falling and they are now being traded down a quarter of their value. This fall reflects investors’ fear that the interest on the securities cannot be paid.

It is not just a Greek problem, as the following graph from the Economist shows. It is also a problem that affects the major economies, from the USA to Europe. The banks’ market valuations are falling and spreading panic around the financial markets because they anticipate short-term risks. 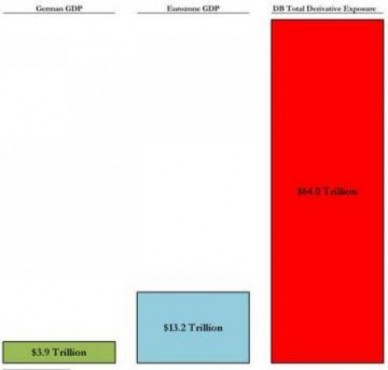 The banks’ exposure to these high-risk operations is significant, particularly for the Spanish and German banks. The three main Spanish banks – BBVA, Popular and Santander – have issued almost €10bn in “CoCos”. So Santander’s difficulties help explain why the European Commission and the ECB’s intervention in the Banif case, with the Portuguese Government’s assent, has led to such an interesting recapitalisation of the Spanish bank.

But it is Deutsche Bank that is worst off. The fourth chart compares Germany's GDP, Europe’s GDP and DB's exposure to high-risk financial products, the same derivatives that became famous in the subprime crisis in 2007-2008. Having recorded losses of €6.7bn last year, and having been forced to increase its provision for litigation by more than €1.2bn (increasing to €5.5bn), DB is now the European bank that has the greatest short-term exposure.

This is the backdrop that we should bear in mind when discussing what is going to happen in Portugal’s banking sector in the coming years.