Artigo    /   English    /   Towards a European Recovery Fund, achievable and without the threat of austerity

The decisions taken by the Eurogroup were limited to a package of debt instruments, some of which are the result of initiatives already known to the Commission, in addition to the use of the European Stability Mechanism. This mechanism currently practices a higher interest rate (0.76) than that of the most recent emission made by the Portuguese State of seven-year Treasury bonds. 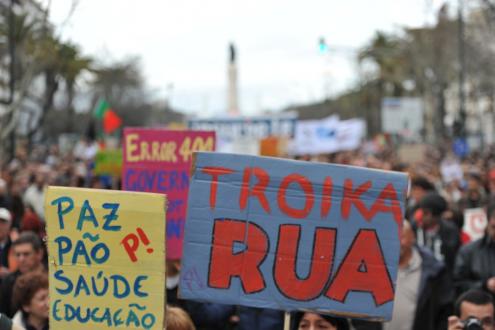 The decisions taken by the Eurogroup were limited to a package of debt instruments, some of which are the result of initiatives already known to the Commission, in addition to the use of the European Stability Mechanism. This mechanism currently practices a higher interest rate (0.76) than that of the most recent emission made by the Portuguese State of seven-year Treasury bonds.

Even if that rate is reduced for the purposes of this credit line (which has not been announced), the advantage of issuing Treasury bonds is still greater today, because a substantial part of these bonds will be acquired under the European Central Bank’s securities purchase program. And 90% of the gains obtained with the interest on these bonds remain with Banco de Portugal and return to the State, through the corresponding dividends.

Finally, the financing obtained through the State has no restrictions on its use, does not cause any reputational damage (unlike resorting to the European Stability Mechanism) and is considerably more robust. The limit for purchases of Portuguese government bonds in the European Central Bank program (in the 750 billion programme alone) is 14.2 billion, according to the ECB’s capital key. In other words, more than three times the limit of the European Stability Mechanism. And this is not the full capacity of the ECB, which still admitted to deviating from that key.

It is for these reasons that the Portuguese Ministry of Finance has already assured that it has no plans to use the mechanism proposed by the President of the Eurogroup...

Besides these ineffective or insufficient instruments, the Eurogroup meeting practically buried the Eurobonds’ proposal, which is cryptically mentioned in the category of “innovative financial instruments”. It is clear, in any case, that such proposal would only be useful if it did not contribute to the accumulation of unbearable amounts of debt in the Eurozone.

The profound hypocrisy of the European Commission and the German government, which both have produced multiple public statements in the name of solidarity but have opposed all solutions other than those contained in their initial proposals must be emphasised. The outrage with the Dutch Finance Minister’s unacceptable public statements should not overshadow the fact that Germany once again led the opposition to any kind of solidarity response in the European Union, with the support of the Commission chaired by Ursula von der Leyen.

The idea that the approved instruments do not imply the imposition of austerity policies is an absolute fraud. The Eurogroup document itself already makes reference to compliance with the Stability and Growth Pact rules, which means that the corollary of a European response based on the accumulation of debt will be the pressure for States to implement austerity policies soon after.

The only reference to the conclusions of the Eurogroup meeting that could pave the way for an economic response at the time of the crisis is a Recovery Fund to finance countercyclical policies. However, the essential questions remain to be answered: what the size of this fund is, how will it be financed, how will it be distributed and whether there will be associated conditionality.

The present proposal of Bloco de Esquerda aims to answer these questions, seeking to explore the only instrument eventually acceptable that is on the table today, the Recovery Fund.

1. Conditionality – which means an adjustment memorandum – must always be excluded. On the contrary, the response to the crisis must be aimed at economic recovery. It is absurd to create financial mechanisms that support states if recessive measures are then imposed on them that prolong what may be a temporary crisis.

2. The size of the Fund hereby proposed is directly associated with the impact of the recession. The amount to be made available should be what is necessary to restore the Eurozone’s real GDP to the levels of 2019, including a real growth of 3%. The fund’s amount will be calculated for that purpose. For the minimum estimate of the GDP drop, we take the average value of the fiscal multiplier estimated by the IMF in the study by Blanchard and Leigh (1.1) and the OECD formula (2% drop in GDP per month of social isolation) for a minimum of two months. Therefore, the fund must be immediately endowed with a capacity of at least 6.3% of the Eurozone’s GDP, that is, about 750 billion. Once the Eurozone GDP figures are known, the Fund should be increased by 120 billion per percentage point of GDP drop above 4%, that is, it could reach 1.47 trillion for a 10% drop in GDP.

3. Fund financing must be made through bonds issued by the Fund itself (if it has a formal existence) or by the European Investment Bank. In either case, the bonds are fully acquired by the European Central Bank. Securities will have a rate of 0.05% and a maturity of 80 years.

4. This amount must be distributed among the Member-states of the Eurozone/European Union according to the formula for the distribution of cohesion, as an instrument associated with the Community Budget. Each Member-state will be responsible for repaying the amount of obligations corresponding to its own financing (or applying the ECB key).

We believe that the current crisis, much like the previous one, confirmed the inadequacy of the rules of the Stability and Growth Pact, so the suspension of the SGP should continue, until its revocation is possible. In any case, the debt contracted under the Recovery Fund will not be considered for the purposes of meeting the goals established by the SGP, even if the suspension is lifted.

The Economic Recovery Fund hereby proposed is formally a debt instrument. However, the characteristics of this debt are radically different from those of the debt generated under the instruments hitherto agreed. The near-zero interest rate avoids a counterproductive deterioration in the debt service of the affected countries. On the other hand, the long maturity allows not only to move the amortisation away from any relevant decision of States or investors, but also, more importantly, to ensure the devaluation of the principal over time, which corresponds, in fact (but not legally, which makes a difference), to a partial monetisation of debt by the ECB, making this Fund a debt and monetary financing hybrid. With an average annual inflation of 1.5% until maturity, the principal would devalue around 70%.

Finally, a financing package of this nature shall reduce the pressure on the financing of all Member-states, contributing, together with the ECB’s action, to reduce and converge the spreads with which States finance themselves.

Responding to the ECB’s calls for a determined fiscal response, the Fund would make it possible to improve the conditions and effectiveness of the recently announced monetary policy measures.

Despite Bloco de Esquerda’s critical position on the various legal constraints and treaties that define the actions of national and European institutions, including those of the ECB, this proposal has a political advantage: that of being achievable within the existing legal framework. It is a proposal for multilateral and voluntary financing, available to all Member-states, without direct (or indirect) transfers between Member-states and in which currency issuance has as a counterpart the transfer of an asset to the balance sheet of the Central Bank. There is not even risk sharing between States because the securities will be held by the ECB.

The economic crisis caused by the Covid-19 pandemic is going to be acute, so it is not acceptable that EU decisions contribute to its degeneration in a prolonged recession. It will be possible to resume the levels of economic activity before the crisis in a short time, as long as there is an immediate and determined response from the European institutions and conditions so that the Member States can translate it into concrete policies, without fear of a subsequent new wave of austerity.

If this cooperation does not exist, the European Union will have left each country to its own.