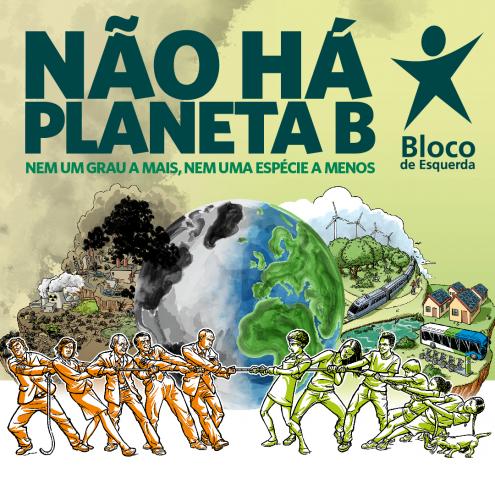 "There is no Planet B – not one degree more, nor one species less" is the latest slogan of Bloco de Esquerda for the campaign to combat climate change.

The highest temperatures, since there are records, have occurred in the last five years. Despite the many speeches around the world and the commitments made in international climate agreements to significantly reduce emissions of pollutants, almost everything remains to be achieved. Apart from being very serious, the situation in which the planet finds itself requires a high sense of urgency to save it from an irreparable and irreversible catastrophe.

Marisa Matias, Member of the European Parliament for Bloco de Esquerda since 2009, has always been at the forefront for a model of economic transition that bets on alternative energies. For this MEP, who was re-elected in the recent European elections last May, combating climate change “is one of those issues which is inseparable from cooperation at European level, but we cannot ignore the fact that each country has to make its part” and reinforces the need for a climate emergency plan. “Whoever shows up on the street, the thousands of young people all over Europe, have noticed it for a long time, but the powerful (stakeholders) have not yet realised something so basic such as the inexistence of a planet B.”

Catarina Martins, the National Coordinator of Bloco de Esquerda, has been warning and stressing that “we do not need old policies, but new policies that perceive the environmental urgency”, considering as inadmissible the maintenance of an industry and energy production based on the logic of “it is possible to pollute for those who can pay for it”. According to Catarina Martins, “no money saves us from climate change. We do not need to charge those who do carbon emissions, we need to clearly limit carbon emissions and a policy of strategy and investment that puts the environment at the centre”.

José Gusmão, the second European MEP elected by Bloco de Esquerda in the recent European elections and proponent of a green economy, points out that in order to respond to climate change and create sustainable employment, Portugal and Europe need “strong measures for the regulation of the private sector and public measures to change the production".

The UN Secretary-General, António Guterres, affirms that “climate change is moving faster than we are” and, more than matters of opinion, these words reflect facts. Based on this assumption, Bloco de Esquerda has been arguing that Portugal must declare a state of climatic emergency, by taking concrete measures to anticipate the goal of making Portugal neutral in CO2 emissions by 2030. The proposal was already voted and approved in the national parliament. However, one of the demands of the proposal suffered rejection from the government and abstention from the right-wing parties (PSD and CDS-PP) and from the Portuguese Communist Party (PCP). This is a great obstacle to the practical applicability of the approved proposal.

Meanwhile, Greta Thunberg, symbol of the fight against climate change, was invited to visit and speak in the Portuguese parliament by the Environment Committee, whose president is Pedro Soares, representative of Bloco de Esquerda. Pedro Soares stressed that the presence of the Swedish activist will be an opportunity to alert to the urgency of combating climate change and to give an important signal of mobilisation and the involvement of younger generations. “With the decarbonisation of the economy becoming a central issue, when the production of energy from coal is only planned to end in 2030, and when Portugal has very low photovoltaic energy production”, the presence of Greta Thunberg may put more emphasis on the urgency of the fight against climate change, he said.

Combating climate change requires urgency and seriousness and therefore cannot continue to be postponed and remain hostage to economic interests that are conducive to this delay. We need to decarbonize the economy now, because in 2050 (or earlier) it will be too late.

For the right to a future: not one degree more, nor one species less.