Catarina Martins, national coordinator of Left Bloc, highlighted that “once enacted, the laws on social support have to be applied”, besides guaranteeing “the support that has been legislated is already in force and it is important to ensure these benefits reach the people needing them”. 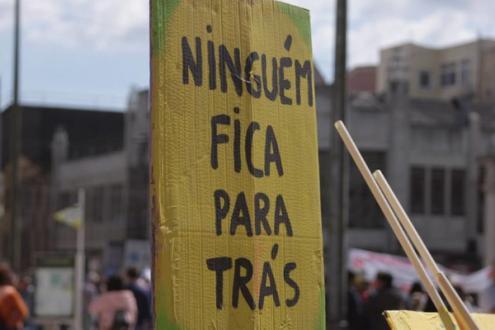 The national parliament has recently approved amendments to three government decrees on social support related to economy, health and education. One provision extends the scope of social support for self-employed workers and managers; another extends the scope of the exceptional measures for health professionals in pandemic context also to the recovery of primary and hospital care not related to covid-19; and the third provision increases support for parents who are teleworking;

In the face of the current pandemic crisis, with unprecedented economic and social impacts, the denial of social support finds no plausible justification.

However, the Portuguese government decided to create a stir about this issue that can be summarised as follows: i) on the recommendation of Left Bloc, the Portuguese national parliament approved, by a large majority, three bills above-mentioned; ii) these laws were later promulgated by the President of the Republic; iii) after that the Portuguese government decided to send these same laws to the Constitutional Court, for a successive review of constitutionality, under the argument that these provisions do not conform to the Constitution of the Republic because they are considered an increase in expenses that were not foreseen in the State Budget.

It should be noted that the Portuguese Government did not apply 7 billion euros that it had budgeted in the 2020 State Budget.

In a recent interview, Catarina Martins pointed out that “workers desperately need the support”, and so she considers that “sending these bills to the Constitutional Court is a way of creating political drama (…) and not a measure that will produce any tangible effect”.

At the end of her interview, Catarina Martins stressed that “once enacted, the laws on social support have to be applied”, besides guaranteeing “the support that has been legislated is already in force and it is important to ensure these benefits reach the people needing them”.

The Prime Minister’s decision to “wage a constitutional battle against the Parliament’s decision to extend social support” is joined by the Minister of Labour who “seems committed to throwing confusion around the subject, with arguments and numbers that do not add up”, stresses José Soeiro, MP for the Left Bloc and responsible for the areas of Labour and Social Security.

“It is disturbing that the Government considers it normal that most of these workers have now found themselves with 219 euros a month to survive. (...) Fortunately, the self-employed do not depend solely on the Government. Now that a little more justice has been enshrined in the support, it is necessary to ensure that it reaches people as soon as possible”, concludes José Soeiro.