Marisa Matias and José Gusmão, MEPs for Left Bloc, are critical of the European Commission’s "unambitious" policies on social rights and of the follow-my-leader stance of the Portuguese Presidency of the EU Council. 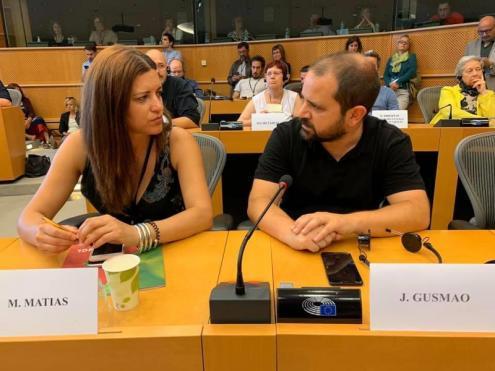 “How can we continue, particularly in the present circumstances, with non-binding targets in the Social Pillar?”, Marisa Matias asked the European Commission, in her intervention during the first plenary session of the European Parliament in March 2021, stressing that “before the pandemic crisis, 91 million people were living in poverty in Europe” and so “proposing to reduce this number by at least 15 million is telling citizens that keeping 76 million people in poverty in 2030 is acceptable - and it is not”.

Rebalancing social and economic dimensions in the EU governance was flagged as a crucial strategy to reinforce and sustain the European project. José Gusmão has pointed out several times that the position taken by the EU, in particular the European Commission, of applying “soft law on social dimensions and hard law on economic governance” is unacceptable and the Pillar is, once again, an example of lack of ambition in shifting the paradigm.

Marisa Matias confronted Commissioner Schmit with the seriousness of his “commitment to a minimum income directive ending up as a recommendation to Member States".

Social rights need concrete actions and binding rules and cannot continue to be held hostage to unambitious policies that put such rights under permanent threat in several Member States.

The Portuguese Presidency of the Council of the EU, which took over from 1 January this year for a further three months, is set to move the EU’s social agenda forward, with the expected approval of the Action Plan for the European Pillar of Social Rights at the Social Summit scheduled for 7 May in Porto, Portugal.

“A credible fight against poverty must have specific and verifiable objectives, with substantial resources. Lisbon was not retained in the memory. I hope Porto will be”, concluded Marisa Matias in the above-mentioned speech.

Although details of the organisation and the participants have not yet been made public, this summit is not expected to have an ambitious outcome given that the Portuguese presidency of the EU Council has been “a white-label proposal, with little identity”, which merely reproduces the priorities of the European Commission, stated several times by José Gusmão.

A true social agenda must focus on social rights and not on inconsequential socialising meetings. Such hypocrisy will be denounced by several initiatives and demonstrations of civil society movements during the summit in various locations of Porto.

In the city of Porto, Left Bloc will naturally mark its presence with proposals that aim to strengthen our fight for social rights - the eradication of poverty, social inclusion, the right to housing - and for labour rights - 35 hours per week of work, the end of work precarity, including the insecure situation of digital platform workers.