Artigo    /   English    /   On the portuguese elections and the Left Bloc result

History shows that Left Bloc has always had the capacity to face difficult moments, and we stand together to shift the present reality. 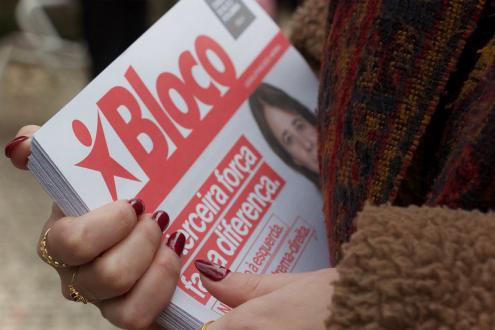 In 2019, the Socialist Party refused to change labour legislation and work on an agreement with Left Bloc. This decision opened a path of approximation to the Portuguese right in several domains. More recently, while negotiating with the Socialist Party for the 2022 State Budget, Left Bloc presented nine proposals aiming to strengthen the National Health Service, Social Security, and labour protection. After several months of negotiation, the Government broke its commitment with the left once again and decided to reject all nine proposals, some of which had been previously defended by the Socialist Party. And so, the 2022 legislative elections took place due to the Socialist Party’s intransigence in negotiating the 2022 State Budget with the Portuguese left, hence as a means to attain an absolute majority.

Such strategy reflects the consistent refusal of elementary social measures and budget proposals that the left has been placing, in respect for its own mandate, as a condition for the approval of State Budgets. If an absolute majority was the Socialist Party’s priority, its secondary goal seemed to be ruling alongside the Social Democratic Party. Such drift indicated that, in order to remain in power and continue to block the necessary responses to the draining of the National Health Service by the private sector or to wage stagnation, António Costa was available to open negotiations with Rui Rio, leader of the Social Democratic Party. History proves that such a centrist solution inevitably leads to more privatisations, to a degradation of public services and to higher levels of poverty. We rather believe that it is the strengthening of the left that stops social stagnation and that imposes clear commitments that defend Portugal and the Portuguese people.

As such, Left Bloc went into the 2022 legislative elections with a platform aiming to guarantee a more equal, free, and inclusive society. The recent experiences in Portugal demanded such a platform, from the austerity cycle imposed by the troika and the Portuguese right – which was interrupted through the political agreements established with the Socialist Party (PS) between 2015 and 2019 – to the current period of stagnation in the main areas of national life. The pandemic crisis has also brought about profound challenges that must continue to be targeted during the next years, but it has also furthered pre-existent socioeconomic vulnerabilities. Inequality – which was already considerable before the pandemic – has grown even more, so much so that 5% of the population holds 42% of Portugal’s wealth. In turn, this phenomenon reversed most of the gains that were made during the period after the troika. That is why Left Bloc ran with the same determination as ever, abiding to a programme that pledged to guarantee the protection of all peoples, work dignity, health safety, and climate justice.

Left Bloc had a programme that protected people against stagnation and that aimed to form a majority in Parliament. We established four main points in our agenda.

The second was to end the long stagnation of the average wage in Portugal. One of the most notorious effects of the degradation of legal protection for workers, severely accelerated under the troika, was wage stagnation. The State itself promoted this situation, by freezing all wages, which were not, in the meantime, absorbed by the minimum wage updates. At the same time, the State has also been stimulating outsourcing in growing areas, which has fostered wage compression and job insecurity. The set of measures that Left Bloc has defended would have the overall effect of increasing wages, while enabling workers to demand more rights and higher wages.

The third was the modernisation of the social security system. With its proposals over the past few years, and particularly during the years of the so-called “Contraption”, Left Bloc has contributed to strengthening the sustainability of social security and increasing its revenues. As for the modernisation of social protection, we defended the creation of a social benefit that places all victims of precariousness or informal employment above the poverty threshold.

The fourth and final point was the implementation of the Climate Law, with concrete steps to reduce greenhouse gas emissions. A similarly important step would be the expansion of the current public transport network and paving the way towards free public transportation. We strongly believe these measures are essential to enable an effective mobility and energy transition.

Our objective was very clear: to remain the third largest political force and increase the number of MPs in Parliament. Besides guaranteeing that the political debate targets fundamental issues such as wages, health, public services, and the climate response, this scenario would also mean a defeat for the extreme-right, which in turn would help to contain its emergence and therefore reinforce the need for a progressive and tolerant agenda.
At the same time, the electoral and political environment was strongly conditioned by the Socialist Party’s attempt to convince voters that an absolute majority was the best way to guarantee stability and progress – when, in fact, absolute majorities have proven to be disastrous in the past, both for democracy and the Portuguese peoples – while the extreme-right remained determined to spread hatred and division to secure more parliamentary seats and pressure the Social Democratic Party to accept future government deals.

Another phenomenon that profoundly impacted the electoral behaviour was the prolific release of polls (some released on a daily basis) which pointed to a technical tie between the Socialist Party and the Social Democratic Party in the very last days of the campaign. It is now clear to us that this phenomenon came to condition the vote of the Portuguese peoples, and particularly those who traditionally vote on the left, who eventually chose to transfer their vote to the Socialist Party in order to avoid having another government led by the Social Democratic Party and the extreme right. Hence the Socialist Party’s absolute majority.

Despite this poor result for the left and for Left Bloc, our five elected MPs will strictly fulfil their mandate and abide to the electoral program with which they ran for the elections, standing by the National Health Service, the climate and the lives of the working peoples. We will be a guarantee against the dangers of absolute majorities, and an active voice against racism, hatred and fear that the extreme right – which elected 12 MPs, including one woman – has brought to our society. Indeed, history shows that Left Bloc has always had the capacity to face difficult moments, and we stand together to shift the present reality.