Artigo    /   English    /   The pandemic crisis cannot be an excuse for the lack of social support; it must be its biggest motivation

After a year of having to deal with the Covid-19 pandemic, we can safely acknowledge that social support in Portugal has been clearly insufficient. 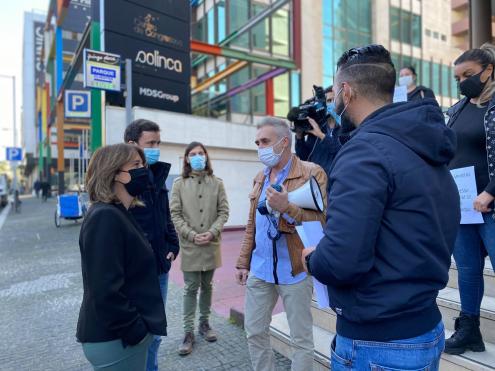 From all around the world, the enormous impacts of the Covid-19 pandemic are quite visible, not just in terms of health, but also in economic and social ones.

In Portugal, the situation of new cases of contagion and mortality has been extremely worrying, particularly since the beginning of this year.

It has therefore been necessary to extend the state of emergency which, among other measures, has imposed a general confinement.

José Soeiro, Left Bloc’s MP and responsible for labour and social security areas, declared that “for a large part of the country to confine, we need to guarantee all working conditions to those who remain on the front line (in health, services, industrial production, supply, retail, transport, social support, etc.) and enough support which is capable of insuring that those who have been or will be without income survive this crisis. Thousands of people face the effects of the big gaps that continue to exist”.

The pandemic crisis cannot be the excuse for failing social support; in fact, it should be its biggest motivation, and such support should be given to all who need it.

After a year of having to deal with the Covid-19 pandemic, we can safely acknowledge that social support in Portugal has been clearly insufficient. The data points to an ineffectiveness of some of the presented proposals and to an insufficiency of the various social support mechanisms.

“The social supports provided for in the Supplementary Budget for 2020, approved in July 2020, were delayed by months in their application” and “the supports registered in the State Budget for 2021 are generally worse than those that were in force in 2020 and are therefore inadequate”, stresses José Soeiro, and exemplifies: “a couple with an average income (€860 each) in which one of the members loses income from self-employment is now excluded from support – when in 2020 they had social support amounting to €438.81”.

Social supports such as the Exceptional Support for the Family were diminished comparing to the previous year, and others were almost null at a time when they are more than urgent, such as the Support for Informal Caregivers, when the amount budgeted in 2020 was 99% unused.

In early February, Catarina Martins, Left Bloc’s national coordinator, and MP José Soeiro, held an online meeting with hundreds of people who are facing a total void of social protection. There were dozens of interventions, the vast majority from women with children who have no chance of finding a job or that were neglected precisely because they had children. Among this group were the signatories of a public petition for the extension of social support, a petition with which Left Bloc has shown complete solidarity and support. This civil society movement has already had a small victory as it is obliging the Portuguese Government to partially revise some measures thar were previously applied.

In the view of the above, the lack of social support allocated to the Portuguese people amid the pandemic crisis was one of the prior reasons for Left Bloc’s decision to vote against the State Budget 2021; Bloco de Esquerda is and will always be on the side of workers and of people in the most vulnerable situations and will support proposals only if and when they respond to the population’s actual needs.