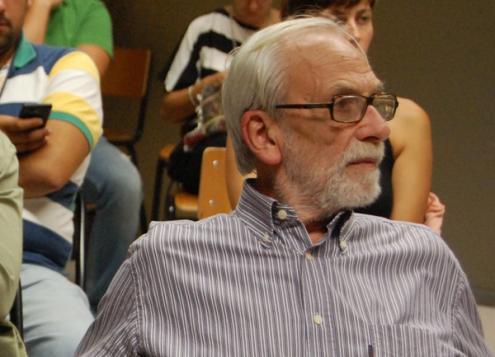 Shortly before Christmas, an outstanding figure on the Portuguese left sadly passed away. Bruno da Ponte was 86. In a long life, he was editor, bookseller, translator, journalist, gallery owner, teacher, cultural and political activist, a man of letters and the arts; but above all, he was a radical socialist. He died a member of the Left Bloc, the electoral grouping he had helped found in 2002.

Born in the Azores, Bruno was forced into exile by the Portuguese Dictatorship and developed close links with the liberation movements fighting Portuguese colonialism in Mozambique, Angola, Cape Verde and Guinea Bissau before coming to Britain where he published “The last to leave. English colonialism in Africa: an introductory outline.”

Bruno set up home in Edinburgh where his wife, Clara Queiroz, taught at the University. She had been thrown out of university back home by the dictatorship. It was in Edinburgh I got to know them and their two sons, the elder, João, became a firm friend and comrade of mine, going to watch Hibs in between political activity.

Clara and Bruno were like a shaft of light in Edinburgh. Both were cultured intellectuals, charming company whose parties I fondly remember. But they were both active, helping the fellow Portuguese intellectuals in London who organised catering and hotel workers into the Transport Union and organising solidarity for the liberation movements fighting Portuguese colonial rule.

That war drained away what scant resources the dictatorship had and on 25 April 1974 a group of young army officers, radicalised by the wars in Africa, launched a military coup which ended it. Immediately the people took to the streets hunting down secret policemen they had previously feared and who had tortured so many. The dictatorship was swept away completely, unlike what occurred in Spain little more than a year later.

Bruno and Clara moved back to Portugal as revolution swept the country. Inevitably we lost touch. But years later, in 2005, I attended a Left Bloc conference in Lisbon, where my name was read out as one of the international observers. My friend, Jorge Costa, came to tell me someone was looking for me, it was Clara and Bruno. We went to a nearby restaurant and over delicious rabbit caught up with what had gone by.

I discovered they had both been members of the PRP, Partido Revolucionário do Proletariado, which before 25 April had tried to wage armed struggle against the dictatorship. After that date it became the largest of a number of far left groups that emerged into daylight, with a significant working class base, though not on the scale of the Socialist and Communist Parties.

On return to London, as the then editor of Socialist Worker, I asked Matthew Cookson to interview them and another Left Bloc comrade about the revolution.

What isn’t there is that after 25 November and the decisive defeat of the revolution, Bruno became embroiled in a bitter fight within the PRP against a leadership urging a return to armed struggle. When it was clear he was not going to win, he walked away, rightly saying it would end in catastrophe.

What Jorge Costa then told me was that Bruno was not finished. He played a key role in the long and difficult process of piecing the Left Bloc together from the fragments of the far left, Communist dissidents, feminists and environmentalists. Jorge said Bruno kept in the background arguing a new generation had to take a lead but gave crucial strategic advice and urged patience.

Clara and Bruno returned to the Azores, where he ran as a Left Bloc candidate. Tragically, João, who settled there too with his young family, died. It was a heavy loss.

In my memory, I am back at an all-night party in their home in Liberton, South Edinburgh, dancing, singing, eating and talking politics. You felt you were a long way from the Firth of Forth and all too briefly on the banks of the Tagus. For a young kid, Bruno and Clara made a huge impression and helped raise my sights.

Chris Bambery is an author, political activist and commentator, and a supporter of Rise, the radical left wing coalition in Scotland. His books include A People's History of Scotland and The Second World War: A Marxist Analysis.

This article was originally published by Counterfire on January, 7th 2019.