New Laws to protect debt-ridden families from foreclosures and evictions

Parliament discussed a proposal presented by the Left Bloc banning tax authorities from selling homes of families with tax debts. A Socialist Party law on the same subject, which goes beyond what was originally written in the government programme, was also voted. 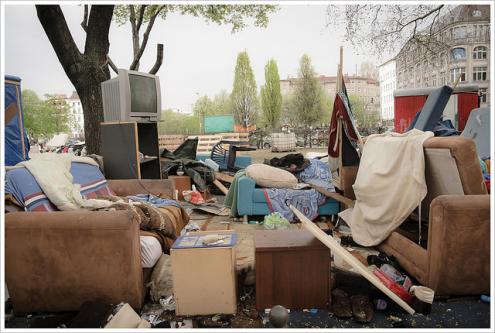 The law presented by the Left Bloc guarantees that homes of people with fiscal debts will not be foreclosed and families cannot be evicted. In this law draft, the party recalls the effects of the crisis on the majority of Portuguese families over the past four years, mentioning that the situation has led to people not being able to pay their debts. In the case of fiscal debts, which “determine in many situations the foreclosure of bank deposits, wages, vehicles and properties, leading to the foreclosure of family homes”.

The Left Bloc highlights that the State “through the tax authority (TA), has been one of the main executors of the foreclosures, automatically executing all debts above 150 euros. Since 2014, 5 891 families have lost their homes due to debts to the TA and, in addition to that number, there are all the cases of families who have lost their homes to banks because they were unable to repay their bank loans”. The Left Bloc highlights that properties are the most foreclosed and sold assets, according to the AT, and the foreclosure of homes is “the last resort, showing that homes are the only asset those families have left”. The party adds that “in October 2014 a widow with a tax debt of 1900€ from a Vehicle Excise Duty, receiving minimum wage, had her home foreclosed. The property was then sold by the TA for 19 500€, ten times the value of the original debt”.

The laws voted this week

The Socialist Party’s law goes beyond what was written in the government programme. “The current law totally guarantees the goal of the government programme, going even further, as sales of homes of families with tax debts are prohibited, regardless of the value of the debt to the tax department or to social security” defends the Socialist Party law.

This was one of the measures of the agreement between PS, Left Bloc, the Communist Party and the Green Party to stop impoverishment. However, PS and Left Bloc laws differ. The law presented by the Socialist Party bans the sale of the foreclosed asset, while the Left Bloc proposes banning foreclosure and extends the ban to foreclosure of family homes in a civil proceeding. PS has announced that, once the laws have been voted, they are willing to write up a common text with the other parties.