Full Contents of the Agreement between Socialist Party and Left Bloc

The full contents of the agreement signed between the Socialist Party and the Left Bloc can be read here. 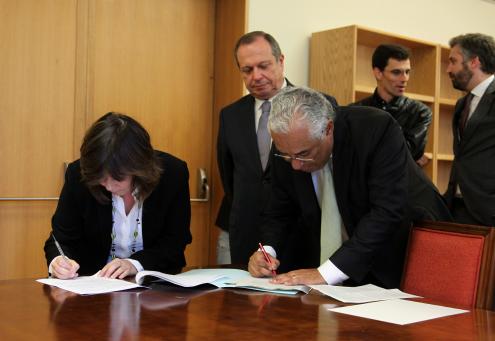 "The Socialist Party (PS) and Left Bloc subscribe the position that follows on the political settlement achieved in the framework of the new institutional set-up for the XII legislative period, which stemmed out of the 4th October elections.

The outcome of the elections that took place on October 4th 2015 spelt a clear defeat for the pauperisation strategy and austerity policies led by the PSD-CDS coalition throughout the past four years.

Bearing in mind the major difficulties Portugal is facing, due to longstanding social and economic crisis and an external environment of high uncertainty, and in the light of the new parliamentary framework stemming of the election results, PS, Left Bloc and CDU have announced a convergence process based upon the patriotic need to translate into politics the will for change clearly voiced by the majority of voters. Accordingly, they took upon themselves the responsibility to negotiate a deal aimed at building a stable, long-lasting and reliable majority at the Parliament, in order to support the formation and subsequent action of a government committed to the change demanded through the ballot-box.

It was within the framework of that goal that PS and Left Bloc have envisaged, throughout an endeavoured mutual approach, to identify subjects, measures and solutions that could embody that crucial sign of change.

It was a serious approach, in which the distinct character of both parties’ programmes was acknowledged, as well as the different premises used to look at and frame pivotal aspects of the country’s current situation.

Nonetheless, above all, our common assignment and evaluation made it clear there is a number of issues that could ensure a swift response to the Portuguese people’s legitimate aspiration to have their incomes recovered, rights restored, and better life conditions granted. Both parties have opted for highlighting the points of convergence instead of those of divergence.

Amongst others, PS and Left Bloc identify as possible convergence issues, regardless of differences in each party’s programmes, in terms of political solutions that can no longer be postponed:

Unfreezing pensions; restoring abolished holidays; a straightforward fight against precarity, including false autonomous workers, improper and excessive use of internships and employment/insertion contracts to replace workers; changes in the assessment basis for social security contributions paid by autonomous workers; the end of the special /re-qualification/mobility scheme; compliance with the right to collective bargaining in the public service; full restitution of pension supplements for state-owned company sector workers; restaurant tax cut to 13%; a new safeguard clause in property tax; protection of family residence homes in the event of tax foreclosures and attachment orders; wider fiscal stimulus in SMEs’ corporate tax; re-evaluation of Single Social Tax reductions and exemptions; public health care system enhancing, with proper human, technical and financial resources, including achieving the goal of providing every user with a family doctor and nurse; repeal of the recent chances to abortion laws; guaranteed access, until 2019, of every three year old to pre-school education; boosting direct and indirect student support; contractual ties for teaching and non-teaching staff in schools; fewer students per class; incremental gratuity of textbooks in compulsory education levels; fostering postdoctoral researchers’ integration into labs and other public bodies and gradual replacement of post-doc scholarships with researcher contracts; halting land transport companies’ concession/privatisation processes; refusal of any new privatisation process whatsoever.

So that they could be included on the government programme, and in order to lay the foundations for future cooperation between both parliamentary groups, SP and Left Bloc have listed some of these and further issues on the appendix attached to the current statement.

PS and Left Bloc acknowledge an agreement in terms of government and its programme would require further political identification; nonetheless, they are fully aware that, within the convergence framework achieved, conditions were created to:

1. bring to an end a cycle of economic and social decay, which a PSD/CDS government would no doubt extend, if allowed to remain in office. To that end, they will reject any other solution that comprised a PSD/CDS government and will defeat any moves aimed at preventing an alternative government solution;

2. establish an institutional basis sufficient to enable PS to form a government, submit its government programme, take up office and adopt polices to ensure a long-lasting solution in terms of the legislative session.

3. based upon the new institutional correlation in place at the Parliament, take measures to address the aspirations and rights of the Portuguese people.

In this regard, PS and Left Bloc state their mutual willingness to:

1. carry out a joint evaluation of how issues upon which there is agreement should be incorporated into the State Budget, both in generic and specific terms, so that the opportunity is not lost to guarantee that such devices are indeed used to

a) hand back wages, pensions and rights straight away;

b) urgently reverse the deterioration in living conditions for the Portuguese people, as well as in social functions available to them, ensuring the State does indeed provide universal public high quality services;

c) force a U-turn on the path of decay, injustice, exploitation and depletion that existed and was aggravated in the last few years.

2. study ways and solutions outside the scope of the State Budget that might be implemented sooner;

3. promote bilateral meetings, regarded necessary by both parties, to examine together other subjects, whose complexity demands it, or related to:

a) legislation with budgetary impact;

b) votes of no confidence in the Government;

c) legislative proposals made by other parliamentary groups;

d) legislative proposals that, despite having no budgetary impact, amount to key aspects in terms of governance and parliamentary proceedings.

The current stance does not curtail other solutions that PS and Left Bloc decide to agree with the Portuguese Communist Party and the Ecological Party “Greens”.

While keeping in mind the political independence of each party and not hiding from the Portuguese the different views held by each party on many political choices (described on their party programmes), the parties that sign this agreement clearly state their will and determination to prevent the Social Democrat Party (PSD) and the Democratic Social Centre Party (CDS) from continuing with the politics that the people have so expressively condemned. Parties signing this agreement guarantee that Portugal will:

a) turn over a new page, away from the politics of impoverishment followed by the PSD and CDS;

b) defend the State's social functions and public services, social security, education and health, fighting poverty as well as social and economic inequalities;

c) lead a new economic strategy based on growth and employment, on an increase of income for the families and on the creation of the conditions required for public and private investment;

d) promote a new model of progress and development for Portugal, focused on rising wages and fighting precarity, reviving investment in education, culture and science and restoring hope for the future within Portuguese society;

e) value citizen participation, political decentralisation and the autonomy of the islands.

1. In order to prepare joint initiatives on fundamental subjects, a number of workgroups shall be established at the beginning of the mandate. Such groups will have as members representatives of the parties that signed the agreement and the member of government in charge of the subject at stake. The workgroups will:

- write a National Plan Against Precarity, to be submitted to the Economic and Social Council;

- study non-contributive pensions and the structure of social protection, as well as evaluating measures to fight poverty;

- evaluate the sustainability of external debt;

- evaluate energetic costs supported by families and come up with proposals to lower them;

2. The “conciliatory lay-offs” will not be a part of the Government Programme.

3. Any reduction of the Single Social Tax paid by the employers will not be a part of the Government Programme.

4. On January 1st 2016, Law 53-B/2006 from December 29th, on pensions’ adjustment, shall come into force again. The Government vows there will be no cuts on the pensions' nominal value.

5. The need to diversify the sources of financing of the Social Security must be negotiated by social partners, and the parties that sign this agreement will work together on the proposal to be made by the Government to the Economic and Social Council.

6. As a means of improving the families' income, the Single Social Tax paid by workers earning a gross salary equal or inferior to 600€/month will be gradually reduced until the limit of 4%, with no impact on their future pensions. The loss of income resulting from implementing this measure will be compensated yearly with a State transfer to Social Security of a value equal to that reduction.

7. National Minimum Wage will reach 600€ during this mandate, with 5% increases over the first two years.

8. The Authority for the Working Conditions will see its powers of regularisation of false autonomous workers and other illegal contracts strengthened, leading to an immediate conversion of illegal situations into working contracts and granting workers immediate access to their inherent social rights.

10. The four public holidays abolished by the previous government will be restored.

a) IRS contributions will become more progressive, particularly through an increase of the number of brackets;

b) the familiar quotient introduced in the State Budget from 2015 will be deleted and replaced by a deduction per child;

c) inclusion of a safeguard clause that limits rises in Municipal Property Tax to 75 euros a year in low value privately owned property;

d) prohibition of tax enforcement proceedings whenever the amounts in debt are lower than the home equity value, and suspension of attachment orders on homes of indebted families;

e) reassessment of disproportionately high amounts in fines and interest rates in cases of non-compliance with tax liabilities and introduction of a limit for fines imposed on individuals, namely for not complying with obligations to declare.

g) reduction of VAT in restaurants to 13%;

h) cancellation of the "participation exemption" in Corporate Income Tax introduced by the previous government (going back to a minimum of 10% for social participation) and reduction of the deadline to report company losses from twelve to five years;

i) setting up a system of incentives to set-up companies and to increase production in border areas, namely, by means of concessions on corporate tax related by local creation of jobs.

11. On families’ expenses on electricity and gas:

a) an electricity social fare will be created for low income families;

b) removal of the Audiovisual Contribution from the electric energy bill and its inclusion in the communications bill, with no losses to public television.

a) annulment of the ongoing concessions and privatisations of public transports in Lisbon and Oporto;

b) cancellation of the mergers of water companies imposed on municipalities;

d) no other concessions or privatisations will be allowed."