Left Bloc’s 10th National Convention approved political motion A, “The strength of hope, Left Bloc aiming for a majority”, and elected a new national leadership, with 64 people from motion A, 7 from motion B and 9 from motion R. Catarina Martins was elected coordinator of Left Bloc. 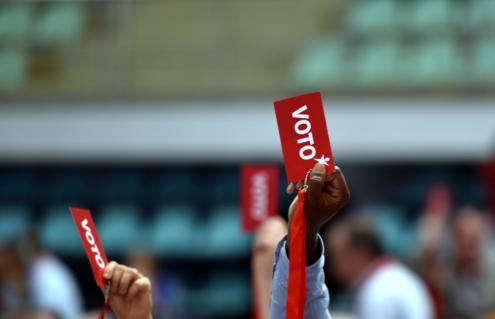 The Left Bloc’s 10th National Convention ended with a vote on the political guidance motion and the election of the national leadership and the committee of rights.

The debate between the political motions was closed by Américo Campos, on behalf of motion B, Carlos Carujo, of motion R, and Jorge Costa, of motion A.

As a consequence of the election results, because motion A stated that the political committee would be coordinated by the leader of the motion with the largest number of votes, Catarina Martins, of motion A, was elected the new coordinator of Left Bloc’s political committee.