This measure results in a temporary residence permit and avoids crowding of the public at the SEF (Serviço de Estrangeiros e Fronteiras – Immigration and Borders Service) during the pandemic. Beatriz Dias, Bloco’s MP, welcomes the decision that guarantees access to social benefits for many "migrant people who work and contribute to social security revenues". 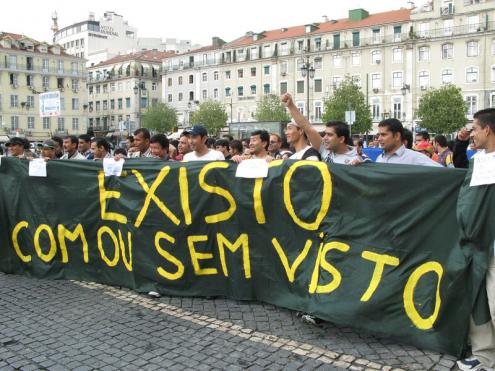 "I exist, with or without visa". Dmonstration in Lisbon. Photo by Paulete Matos

Offices of SEF were closed and pending situations regularised during the outbreak of the new coronavirus. This Friday (the 27th) the government decreed what twenty organisations of migrants' rights had demanded a week ago.

The dispatch signed by Ministers Mariana Vieira da Silva (Minister of the Presidency), Eduardo Cabrita (Minister of the Interior), Ana Mendes Godinho (Mimnister of Labour, Solidarity and Social Security) and Marta Temido (Minister of Health), means that all migrants who had applied for residence visas until the declaration of the emergency state, March the 18th, are now considered as being in regular situation in the country.

Proofs of interest or applications filed at SEF will be now considered as proof that the citizen is in a regular situation in the country. This grants access to the National Health Service, social support benefits, rental and work contracts, opening of bank accounts and contracting of essential public services - explains the Foreigners and Borders Service -. Expired documents are now considered valid until June the 30th.

Offices of SEF won’t open after the weekend given the "need to reduce public health risks, both for SEF workers and the pubic", according to the order. However, urgent cases can be dealt in person. This situation includes "citizens who need to travel or who prove the urgent and unavoidable need to be leave the national territory, for imponderable and unavoidable reasons, and citizens whose documents have been stolen or lost". The urgent issuance of passports will be issued at the Passport Shops of the Lisbon and Oporto Airports. Passport requests should be made by phone or e-mail.

From July the 1st 2020, it is planned to reschedule the appointments "in chronological order, guaranteeing equal treatment for foreign citizens".

In the case of asylum seekers, the government decided that the Asylum and Refugee Office will remain open for new applications for international protection, but deadlines are suspended. Therefore, asylum seekers are also considered to be in a legal situation in the country.

Migrants Associations had written an open letter, Bloco had asked the government

Migrant Associations were already been claiming this type of measures. Twenty organisations had written a letter to the Secretary of State warning about the particular vulnerability of migrant communities at this moment. These NGO’s aimed at safeguarding regularisation procedures of migrants who, due to the Covid-19 pandemic, were or will be dismissed prior to the completion of the regularisation process and several other situations, such as applications for family reunification, study visas, family allowances, unemployment benefits and other social benefits.

Bloco’s MP Beatriz Gomes Dias had questioned the Government on the measures to support migrants affected by the effects of COVID-19. The safety of the public in the migration services was one of the concerns. Another had precisely to do with the Government’s position on applications that may expire during the period of the pandemic.