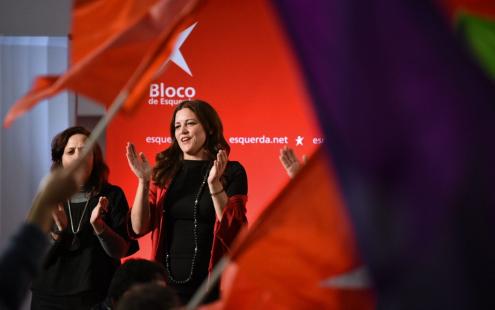 • Strengthening of the universal welfare state, by promoting equal access to health, education and justice;

• Defence of dignity and safety at work, by fighting precarious work, harassment at work and demanding better wages;

• Effective response to climate change through public investment in key sectors such as energy, industry and transport.

List of Bloco de Esquerda to the European Parliament

The list of Bloco de Esquerda for the 2019 European elections is headed by MEP Marisa Matias, and respects gender parity with 11 women and 10 men:

Coimbra, 42 years old. Holds a PhD in sociology from the University of Coimbra and is a member of Bloco de Esquerda’s Political Committee. She has served two terms in the European Parliament, during which she has stood out for her excellent work.

Lisbon, 42 years old. Graduated in economics from the Lisbon School of Economics & Management (ISEG) in Lisbon. He was a deputy of the Portuguese Parliament in the XI Legislature and has worked from 2011 to 2018 as an assistant in the European Parliament, with Miguel Portas and Marisa Matias.

Oporto, 50 years old. Holds a degree in Sociology. Between 2012 and 2018 led the European Anti-Poverty Network (EAPN), currently represented in 31 countries. His professional activity is closely linked to the fight against poverty and social inequalities.

Lisbon, 42 years old. A social and cultural mediator, she is also a leader of SOLIM – Association for the Defence of the Rights of Immigrants. She codirects the Grupo Teatro do Oprimido de Lisboa - GTO LX.

Lisbon, 39 years old. A professor at the Lisbon School of Economics & Management (ISEG), has a master’s degree in Economics from ISEG and a PhD in Economics from SOAS University of London. He was an advisor to the Timor-Leste Ministry of Finance.

Rio Maior, 47 years old. Holds a degree in geography, a master’s degree in Sociology and a postgraduate degree in “Governance, Knowledge and Innovation” at the Faculty of Economics of the University of Coimbra. She is a leader of Bloco de Esquerda

50 years old. Holds a degree in history and is a professor and activist in the defence of archaeological heritage. He is a leader of Bloco de Esquerda Madeira.

Santarém, 33 years old. Holds a master's degree in International Relations from the Institute of Social and Political Sciences (ISCSP-ULisboa) and is a PhD candidate in Anthropology at the ICS-Ulisboa. He is a member of Bloco de Esquerda’s National Committee and a feminist activist.

43 years. Holds a master's degree in Sociology from ISCTE – IUL and is a professor of Portuguese Sign Language (LGP). He is Vice President of the Portuguese Federation of Deaf Associations.

Guarda, 26 years old. She is a psychologist from the University of Coimbra and works in the Portuguese Network of Young People for Gender Equality which aims to promote gender equality and counter gender violence.

46 years old. A coordinator of Faurecia's workers’ committee, in the Autoeuropa Industrial Park. He was a leader of the Trade Union of Workers of Transforming Industries, Energy and Environment Activities of the South (SITE South).

Lisbon, 63 years old. She is a translator and was actively involved in the fight against open pit mining in the protected landscape zone of the Serra de Monfurado.

46 years old. She is a lawyer and municipal deputy in Olhão, Algarve, and local leader of Bloco de Esquerda.

41 years old. He is a lawyer responsible for the Legal and Litigation Department of the Corticeiros do Norte Workers’ Union.

64 years old, lives in Nuremberg, Germany. She has been a teacher since 1981; teaches Portuguese language and culture in the system of Portuguese Teaching for Foreigners and is general-secretary of the Union of Teachers in the Lusíadas Communities (SPCL).

37 years old. Holds a master's degree in Linguistics from the NOVA University and a PhD candidate in Philosophy/Linguistics at the University of Santiago de Compostela. He is also a professor at the School of Education of the Polytechnic Institute of Bragança.

52 years old. She is a professor of Physics and leader of the Union of Teachers of the Central Region. She is a leader of Bloco de Esquerda.

Madeira, 18 years old. Student activist in the Braga region. Currently finishing his bachelor's degree in Applied Biology at the University of Minho.