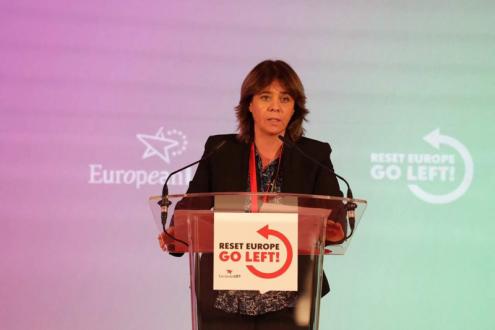 Catarina Martins at the 6th Party Congress of the Party of the European Left, December, 2019. Copyleft: European Left Party

We face three major crises and emergencies: social, climate and peace. Each one of them is related with the others and all of them demand and anti-capitalist response.

There will be no peace where the business of war and the oil industry rule. People that are trying to escape war die at the borders of the same Europe that promised to protect human rights, but stands with NATO's aggressions and does business with warlords.

As climate change spreads devastation in so many parts of our planet, climate refugees and wars for resources will increase.

Europe, the richest continent on the planet, is not only a part of the problem when it comes to war and climate change; it has also its own rising social crisis. The neoliberal agenda that rules the European Union has undermined workers’ rights and is destroying the social state. Therefore, public school, national healthcare services, social welfare and public pensions funds are at risk.

The big question we are facing in order to tackle all of the crises of our time is: Who owns what belongs to the people? No change is possible without the power to decide and without the resources to do it; may it be an ecological change of our economy or the rebuilt of the public services. Offshores, privatizations, concentration of wealth and power are all problems that need to be addressed. To mobilize the people the Left needs a clear program for radical change.

The climate summit - COP 25 – that took place in Madrid has now ended. The popular mobilization around the globe was as strong as ever. Once more, the world leaders made promises but committed to nothing. The determination of the world leaders to tackle climate change always ends where the big international companies’ profits begin.

The European Commission announced a Green Deal but forgot to explain how it will enforce these changes and how those changes will be paid. The United States, Russia and China refuse any solutions and prefer denying science than tackling the growing emissions problem. No news there: imperialism is all about exploiting workers and natural resources. This is why the Left standing with millions of youngsters, which state aloud “there is no planet B”, must fight all imperialist strategies, may it be American, Russian or Chinese. The Left will only stand for peace and for climate justice with a clear multilateral and anti-imperialist strategy.

Tackling the climate crisis demands a structural change in the economy. We will not save the planet and we will not have social justice without stopping the extractivist economy and without gaining public control over natural resources and common goods.

The young generations that occupied the streets demanding climate justice, surprised the world and represent a new hope for real change.

We come from different countries with different experiences. In Portugal, Bloco had an agreement with the Socialist Party for the last 4 years, which responded to a social and economic emergency and we stand by it. However, we have never given up on our own program and we never forgot that our alliance is with the people.

It is the responsibility of the Left, in each country, to fight for progressive social majorities. We stand with the social movements, with the workers, the feminists, the anti-racists and the climate activists. In our institutional responsibilities, we make decisions that can respond to the people’s needs in each moment.

We certainly have very different challenges. One of them is the rise of the far right, a product of the social crisis and lack of hope. The elections in the UK yesterday, and the overwhelming support for Brexit based upon xenophobic lies, is the most recent result of the alliance between conservatives, neoliberals and the far right. In a campaign radically dominated by Brexit and with no Labour Party response to it, the extreme liberal right won. The Right will now claim that it has defeated Corbyn’s economic and social progressive program, but we must not forget that in previous elections the same radical program had a better outcome. Only a program that defends radical change can respond to the needs of the working people.

Where there is anger and no hope for the future, there is hatred. We have the historic responsibility to fight the Far Right and Fascism. To do so, we need to fight its causes and listen to the people’s outrage against a system that condemns the new generations to live worse than their parents lived; a structurally patriarchal and racist system, dominated by the financial elite that tells workers low wages and precarity are the only possible future.

The idea that to defeat the Far-Right and defend democracy the Left must alienate its program is a dangerous one. The promise of a more democratic Europe does not mean anything if it is merely formal and unrelated to the living conditions of the working people. The democracy that Europe needs is the one that comes with decent wages and housing, strong public services and welfare, public control of strategic sectors.