Artigo    /   English    /   Decriminalisation of assisted death, a long struggle of Left Bloc, is approved in the Portuguese Parliament

“With the vote that has just been taken, the Portuguese Parliament added dignity and respect to our democracy,” declared MP José Manuel Pureza. The bill was approved with 136 votes in favour of the Left Bloc, PAN, PEV, part of the PS and PSD, IL, and non-registered MPs. 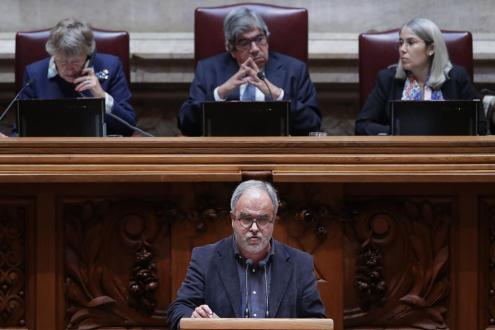 After the bill was approved, Left Bloc MP José Manuel Pureza stated that “the law that we passed, in its combination of boldness with prudence, determination with rigour, is the right answer of democracy to the fundamentalisms and fear strategies that attempted to limit this legislative process”.

“To the spread of fear, the Parliament has responded responsibly and did what it had to do: it brought the best legal, medical, bioethical knowledge to the debate and with it drafted a balanced and just law”, continued the MP.

“The legislative process does not end here. But we trust that the next steps will be guided by the same spirit of tolerance and respect for the free and informed decision of each one that animated the majority of this parliament. In a society that is friendly to pluralism and a State that is friendly to the law, there is no place for any preconceived moral primacy. The only order of values that the legislator has to stick to is that of the Constitution of the Republic. And the law we passed today does it without blemish,” continued Pureza.

“Among the many names that made the path that today gains legal legitimacy, there is one in which all the credits it brings to our democracy are added: João Semedo [former MP for Left Bloc who passed away in 2018]. João Semedo’s courage, knowledge, thoughtfulness, hard work, in short, coined this law and this had to be the day that João would be here with us to approve it. And yes indeed, it was. Because this is the João Semedo Law”, concluded the Left Bloc MP.

“It is a matter of time. It was not now, it will be in the next legislature,” said Semedo after the bill failed to be approved in 2018

The public discussion on assisted death was launched in 2016, by João Semedo as well as José Manuel Pureza and several personalities from parties on the left and right, through 4 bills, one of which of Left Bloc, which “defines and regulates the conditions under which the anticipation of death, by decision of the person with definitive injury or incurable and fatal disease and who is in lasting and unbearable suffering, is not punishable”.

All these bills would end up being rejected by a short margin of votes. In one of his last statements, in May 2018, João Semedo stated that “there were few votes that prevented the approval of the decriminalisation [of assisted death]. It is a matter of time. It was not now, it will be in the next legislature”, he guaranteed, recalling that in the past two years there has been “immense progress in understanding the problems of the end of life, namely, in the legitimacy of allowing the use of assisted death to all who wish to do so, without obliging whoever it is, but also without impeding those who fulfil all the requirements demanded by the law and unequivocally reiterate that this is their will”.

João Semedo’s predictions were confirmed in 2021, with the approval of the five bills presented (including one of Left Bloc, approved with the votes against of the Portuguese Communist Party, Social Democratic Party, CDS – People’s Party, Liberal Initiative and Chega).