Bloco de Esquerda consolidated its position as the third political force in Portugal, maintaining the 19 MPs it had elected in 2015, with 9.52% and 500,017 of the votes, on an election in which the Socialist Party (PS) won the legislative elections without achieving an absolute majority (36,34% of the votes, electing 108 MPs). 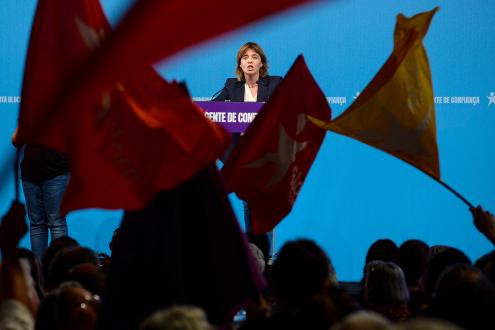 These elections culminated in an historic defeat of the right, with the Social Democratic Party (PSD) taking the second place with 27.77% of the votes, and the CDS – People’s Party (CDS-PP) electing 5 MPs, losing out 13 MPs from the 2015 elections, an outcome which led to the resignation of the party leader Assunção Cristas.

The Unitarian Democratic Coalition (CDU), a coalition between the Portuguese Communist Party (PCP) and the Ecologist Party “The Greens” (PEV), elected 12 MPs, 5 less than in 2015, obtaining 6.33% of the votes.

In addition to the People-Animals-Nature (PAN) going from 1 MP to a parliamentary group of 4, these elections were marked by the entry of three new parties into the Portuguese parliament: the LIVRE Party, the Liberal Initiative Party and the CHEGA Party, each with 1 MP. With the election of 1 MP by the CHEGA party, Portugal becomes yet another country of the European Union with a representative of the far right in its parliament.

Finally, although these elections totalled an unprecedented abstention rate of 51.40%, the present parliament will have the most women MPs (89 in total) ever accounted for and a record number of African-descent MPs (3 in total), including Beatriz Gomes Dias, elected by the Bloco de Esquerda.

Catarina Martins, national coordinator, responded to the election results by underlining the “historic defeat of the right” and the consolidation of Bloco de Esquerda as the third political force. In addition, she affirmed the readiness of Bloco de Esquerda to work on the pursuit of the restoration of rights and to give stability to the country.

Catarina Martins also stressed that Bloco de Esquerda “grew in so many of the country’s districts” and reaffirmed that “the commitments we have always affirmed remain”. The political goals set by Bloco de Esquerda include defending salaries and pensions, strengthening public services and public investment as to respond to the housing crisis and the climate emergency.

Catarina Martins notes that these commitments are the ones “affirmed from day one”. Bloco de Esquerda thus maintains the “readiness to recover living conditions in Portugal” and presents itself as a “guarantee of stability”.

The end of Geringonça (contraption)

Another result of this election was the fact that the Socialist Party preferred not to extend the so-called Geringonça (contraption), a political solution found in the previous legislature, for refusing to comply with the conditions presented by Bloco de Esquerda for the celebration of a new 4-year agreement.

Catarina Martins recalled that at a meeting between the two parties, Bloco de Esquerda presented a document proposing a methodology and political bases for the negotiation of a legislative agreement, in which the political autonomy of the parties co-existed with stability measures towards the recovery of rights and income.

These bases were as follows:

These were the same safeguards agreed by in the last 4 years.

On that occasion, the Socialist Party "undertook to evaluate and respond to this proposal with a view to opening in-depth negotiations." But last Thursday, after meeting with the employers' confederations, “the PS secretary general declared his refusal of any change to the labour law” and then “the PS informed the bloc of his unavailability for the continuation of negotiations on an agreement”.

For Catarina Martins, “the existence of the model of political agreement that became known as contraption” was ended since the Socialist Party “refuses a model that has shown resistance to political turmoil, which prevented setbacks and ensured a stable path of recovery and respect for rights and income”. On behalf of Bloco de Esquerda, she lamented “the Socialist Party’s decision not to continue this path” since “the contraption agreements were a guarantee of stability in people’s lives.”

Given that the Socialist Party will have to seek parliamentary support to pass legislation, including state budgets, the Bloco de Esquerda’s coordinator recalled that “Bloco de Esquerda will intervene in parliamentary work in face of each specific law, with the same availability to find the best solutions”.