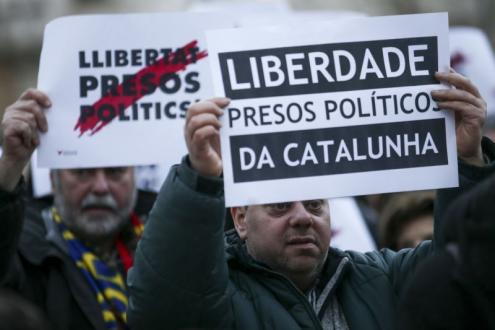 In October 2017, more than two million citizens expressed their desire to vote in a referendum on the independence of Catalonia. At that time, hundreds of citizens were subjected to police repression, duly recorded in widespread images of violence around the world. The Spanish State accused some political leaders and pro-independence defenders of the crimes of “rebellion”, which enabled their automatic detention without a bail. From these facts we may conclude that the convening of a referendum, based on the legitimate principle of self-determination of peoples, embodies the crime of rebellion for the Spanish State.

The allegations of rebellion were soon demonstrated to be unfounded, as it was not proven that the political leaders and pro-independence advocates committed acts of violence, which is a fundamental condition for the crime of rebellion to take place. Notwithstanding these facts, two years later, the Spanish Supreme Court condemns the same detainees for the anachronistic crime of “sedition”, ordering jail terms of 9 to 13 years for nine Catalan political and associative leaders, and 1 year and 8 months for three other persons. It should be noted that all of them had been detained on a pre-trial condition and without bail since Autumn 2017 for a crime they did not commit – rebellion.

These political prisoners, citizens, activists and political leaders have been sentenced to excessive and disproportionate prison sentences for the simple and legitimate exercise of fundamental political rights. This appears to be an undoubtful case of judicialisation of politics, where rights, freedoms and guarantees, such as the right to peaceful demonstration, in particular, are being undermined.

In response to this securitisation of the Catalan case, there have been many demonstrations with thousands of people on the streets of Barcelona and other cities outside Catalonia, such as Lisbon and Porto, which have been followed by numerous denouncements made after the intolerable interventions of the police on thousands of protesters in Barcelona. In Portugal, a letter was recently written by André Freire (politologist), Isabel Pires (deputy of Bloco de Esquerda), Fernando Rosas (historian) and Manuel Loff (historian), signed by 200 Portuguese personalities, in a strong sign of repudiation of the securitisation and the judicialisation of the Catalan situation.

In a statement from the Political Commission, Bloco de Esquerda argues that “only the way of political and democratic dialogue, in strict compliance with the right of peoples to self-determination, can resolve the Catalan issue” and condemns the Spanish State for “seeking to resolve a conflict eminently political through the means of repression and imprisonment ”.

For this reason, “the repeated attempt by the Spanish State to seek to resolve an eminently political conflict through the means of repression and imprisonment” is repudiated, in addition to calling for “the release of all Catalan political prisoners, the return of exiles without reprisals and the end of repression in Catalonia”. Bloco de Esquerda believes that “in democracy, different opinions and the exercise of peaceful opposition cannot be judicially attacked”.

The solution to this case must be political. It is therefore necessary that Spanish and Catalan policy makers find a solution so that Catalan citizens can freely vote on their political destiny.