The Stability and Growth Pact: A Colonial Model 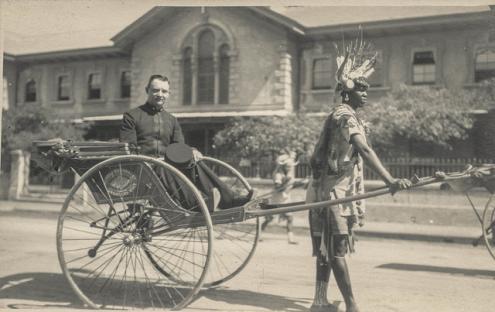 Man being pulled in a rickshaw by a native in costume. Photo by Simpleinsomnia/Flickr.

The Budgetary Treaty emerged in the heat of the eurozone crisis, in a political context that created a divide within Europe. This divide separated creditors from debtors, the hard workers from the centre and the north of Europe from the lazy southerners. The levels of Debt led to the straightening out of the rules of the Stability and Growth Pact (SGP), which, keeping the Euro stable, would act as a lifeline for the European people.

The new guidelines were set out to guarantee permanent austerity. The European Commission gained the right to scrutinise the budgetary policies of each country prior to their submission to national parliaments, which would ensure that targets were being met to reduce the public debt to a maximum of 60% GDP within 20 years and that structural deficit would be at a maximum of 0.5%. If the European Commission finds that these figures are not being met, or that the efforts made by the country to balance their budget are not adequate, corrective action will immediately be requested and failure to comply will lead to economic sanctions. Countries in this situation find themselves caught between a rock and a hard place, because if they reject absolute submission to the commission, there will always be one (or several) credit-rating agencies that will do the dirty work of creating panic in the markets to degrade financing conditions for the countries and force them to give in. Last but not least, an automatic procedure for imposing penalties was adopted, which can only be opposed through a majority vote in the European Council, where six countries hold 70% of the vote and no decision can be taken against the will of the four major countries.

It’s no coincidence that the previous paragraph did not mention the word democracy. The whole process of prior approval by the Commission and debates on budgetary decisions happen on the margins of the general public’s choices or those of national parliaments. In this model, countries can only enter the system on a level that will bring them impoverishment, worsening inequality, the destruction of the welfare state, the reduction of rights, or huge structural unemployment.

In the colonial model, the metropolis gains all of the wealth produced in the colony, the colony’s elite are submissive enough to the metropolis’s elite to ensure compliance of the directives and the submission of the people, and the instruments of domination guarantee the economic dependence of the colonized. This is what the Budgetary Treaty does, it ensures the transfer of wealth from the periphery to the centre with abusive debt payments, privatization, and the dismantling of the welfare state; it creates financial dependency and maintains latent market pressure against countries; and finally, it ensures that fiscal policies are drawn up by the European elite, above the will and determination of the people.

In the colonial model, there is no room for compromise, only for combat, which is the only way in which the people can be freed.

Article originally published in the blog A Contradição on February 1st 2016.

Translated by Luci Ruas for esquerda.net/English.