Artigo    /   English    /   Gay adoption passed in parliament, but still there is no government

Gay adoption passed in parliament, but still there is no government

Yesterday the President held meetings with all the parties with elected MPs to discuss the future government. Meanwhile, in parliament, the left wing passed historical bills on gay adoption and abortion. 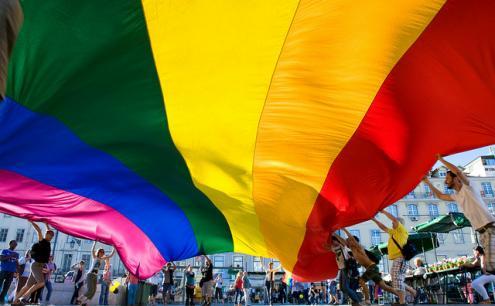 The secretary general of the Socialist Party (PS), António Costa, stated before the President that the agreement with Left Bloc, the Communist Party (PCP) and the Green Party (PEV) will allow PS to form government “with the programme that has already been approved”, which, according to António Costa, is stable and will guarantee that the government lasts for four years. “Our government programme resulted in a coherent programme, consistent with our electoral commitments, compatible with the international demands of Portugal” said António Costa.

Catarina Martins, of Left Bloc, said after the meeting with the President that António Costa should be appointed “as soon as possible”. According to Catarina Martins, the agreement between PS and the left-wing “will guarantee not only the approval of a government programme, but also an economic and financial commitment to the state budget and the commitments of economical and social policies that will be approved during the full term of office”.

One of the bills passed repealed the changes to the law on the decriminalisation of induced abortion introduced by the right wing. Another bill, submitted by the PS, the BE and the PEV, recognised the same-sex couples' right to adopt, an historical advance to civic rights in Portugal.

Jerónimo de Sousa, of PCP, insured the need for a “government of PS to be appointed and to start governing for a full term of office”. “Taking into account the will of the majority of the MPs, corresponding to the will of the people, there are different conditions for PS to form government”. Even Passos Coelho, the current Prime Minister in the Caretaker Government, said after his meeting that António Costa should be appointed. The President has yet to announce when ´he will reach a decision.

In the meanwhile, in parliament, the meetings continue even without a government, and the left-wing majority discussed and passed several members' bills. One of the bills passed repealed the changes to the law on the decriminalisation of induced abortion introduced by the right wing. Another bill, submitted by the PS, the BE and the PEV, recognised the same-sex couples' right to adopt, an historical advance to civic rights in Portugal.

Next week, the member’s bills submitted by the left wing will continue to be discussed. On 26 November, the parliament will vote on PS bills, supported by the left-wing parties, to change the austerity measures that had been implemented by the right wing: the wage cuts for public workers, the reduction and removal of progressive tax brackets for income tax, and the solidarity tax. On the same day, the discussion will also include opposing bills submitted by the right wing to reduce or keep the very same measures. Medically assisted procreation (MAP) will be discussed on the same day with bills from the PS and the Left Bloc.