This week civil servant trade unions met with government to demand restitution of cuts made by the previous right-wing government. 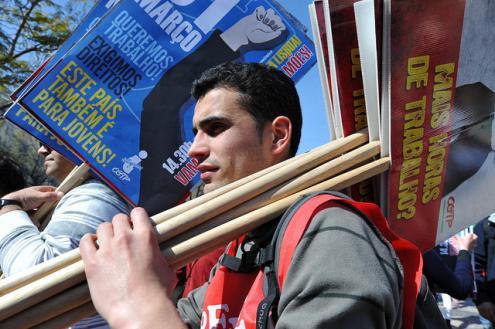 Civil servants, who have been hit hard by austerity measures in the past five years, hope that that the new government will now turn the situation around and restore labour rights and working conditions. In this week’s meeting with the government, unions insisted on immediate restitution of the 35-hour week, the end of the “re-skilling regime” and recovery of career progressions, which have been frozen for many years, and have called a strike for the end of the month if the 35hr week is not immediately restored.

Parliament is discussing this week law proposals put forward by left-wing parties in order to restore the 35-hour week for civil servants, a unanimous proposal included in the agreement between PS and left-wing parties, but different dates of entry into force have been proposed by the various parliamentary groups. Left Bloc and PEV (Greens) propose five days after publication for entry into force of the restitution of pay cuts, while PCP (Communist Party) proposes that it goes into effect 30 days after its publication. PS proposes extending the date to 1 July. The decrees were discussed and voted this week. Civil servants started working 40 hours per week in September 2013, but the 35-hour week was formally adopted by many local authorities.

The phased recovery of salary losses in the public sector until the end of 2016 is already in force. The elimination of pay cuts for those who earn more than 1500 euros gross will take place in phases. In the first trimester, the cuts will vary between 2.1% and 6%; in the second trimester between 1.4% and 4%; in the third trimester between 0.7% and 2% and, as of October, the cuts will disappear completely. Christmas bonuses will continue to be paid in “twelfths” and summer bonuses will be fully paid on the usual dates.