The final decision will be reached at the Ecofin meeting on 12 July. Yesterday, Catarina Martins used a live broadcast on Facebook to explain the Left Bloc’s proposal to hold a referendum on the Budgetary Treaty if the European Commission eventually decides on sanctions. 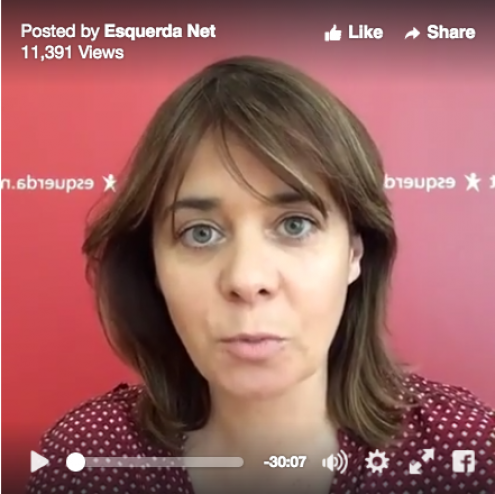 This Tuesday afternoon, the European Commission at last revealed the final decision regarding whether or not to apply sanctions to Portugal and Spain. It was a week of intense blackmail over Portugal not limiting the deficit to 3% of GDP. After the meeting, it was initially thought that the decision would be postponed, but it was finally made public that the Commission has decided not to sanction Portugal. A final decision will be reached by the Economic and Financial Affairs Council (Ecofin), on 12 July.

Catarina Martins, the Left Bloc’s coordinator, explained that while the Budgetary Treaty is an intergovernmental treaty, a referendum could be held to decide whether or not to accept it. The Portuguese Constitution has been changed so that European treaties cannot be decided through referenda. Hence, from the moment the Budgetary Treaty becomes a European treaty, Portuguese people will no longer be able to say whether or not they accept it. Faced with the eventuality of the European Commission sanctioning Portugal, Catarina Martins defends the Left Bloc’s proposal to hold a referendum on the application of the Budgetary Treaty.

Last Tuesday afternoon, in a live broadcast via Facebook, Catarina Martins explained that the deficit that is now under discussion corresponds to the 2013 to 2015 period, that is, to the previous, right-wing government, which applied all the measures recommended by the European Commission. This led Catarina to say that “the European Commission was responsible for these measures. The results were so bad that the voters already sanctioned the former government in the last elections”.

Catarina Martins explained that the sanctions are “political, not technical”, and Portugal is now being threatened with them for the anti-austerity political measures that the current government is undertaking. According to the Left Bloc’s coordinator, the sanctions “are decided without the people from the respective countries being heard” and “Portugal shouldn’t be forced to respect treaties and rules that are absolutely absurd”.

Catarina Martins emphasised the different treatment that is now being given to Southern countries. “The European Commission never predicted sanctions for countries with a commercial imbalance; Germany has had several trade surpluses and has never been sanctioned for it. It didn’t even allow a regulation for the type of sanctions for cases such as its own”. Moreover, compared to Portugal, France “had the same failure, and sanctions are not even on the table”.