The government expects to submit the State Budget to parliament in the beginning of February. Brussels said it demands a deficit below 2.8% and the German bank Commerzbank predicts Portugal will find itself in the same situation as Greece. The leftist parties warn that the Budget will have to mirror the agreement they struck with the government. 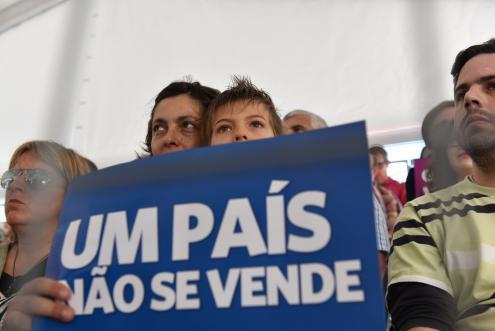 "A country is not for sale". Photo by Paulete Matos.

The government is expecting to submit the State Budget (SB) for 2016 to parliament in the first week of February. However, a draft of the SB has been discussed before the European Commission, who has publicly announced it will demand a deficit below 2.8%, refusing to add any comments. Brussels is thus demanding the PS to lower the deficit by a further 0.5, in order to compensate for the fact that in 2015 the value was above predictions.

To obey the European Commission, the government is facing a difficult equilibrium between what is demanded by Brussels and the promises made in the agreement with the left-wing to revert the measures of the previous right-wing government. The deficit for 2015 reached 4.2% after the European Commission chose a solution to the Banif bailout that cost the State 1.7 bn more than what it could have. Now, Brussels says it is unhappy with the deficit having been over 3% and claims it will not turn a blind eye to a “new slide”.

But the European blackmail goes further than the European Commission. The economists from the influent German bank Commerzbank released a catastrophic report saying Portugal will soon be in the same situation as Greece, because the Portuguese government is issuing a “fundamental change of politics”.

According to the report, the situation in Portugal can quickly change to what happened in Greece last summer and the economists predict the lowering of the rating by the agency DBRS. This will lead the European Central Bank to stop buying Portuguese debt, unless the country asks for a new bailout.

The German bank criticises all the measures announced and already put into practice by the government, starting with the return of the four public holidays that had been cancelled by the right-wing, and the intention to give back to the civil servants 25 days of holidays. Criticism is also levied at the returning of civil servants’ salaries to pre-troika levels and the “reversion of the liberalisation of the labour market, with the strengthening of the collective labour contracts”. The German bank also does not believe the government will reach the 3% deficit in 2016 and regrets the reversion of the wage cuts.

Catarina Martins, the Left Bloc’s spokesperson, said that this time “the Portuguese State will have a different relationship with the European institutions”. “We have to be absolutely firm at this moment and say that there is no warning from anywhere that can question the signed agreement to stop the impoverishment in Portugal, and the SB for 2016 will naturally mirror that agreement”, she warned.

“Eventually, someone from the European Commission did not understand that we had elections in Portugal, that the people chose and chose to do things differently from the right-wing. The Portuguese State does not have to be the “good student” of bad politics, it has to have the courage to defend the people who live here. In the Left Bloc, we take the agreement we made very seriously”, she assured.

The Communist Party has said “succumbing to the troika would question the government agreement”. Jerónimo de Sousa, the party’s secretary-general, warned that how long the government will last will depend on the Socialist Party. “You can count on the Communist Party to examine problems, to find solutions, but the government has the main role because, if it rules against the interests of the workers and the people, it won’t go far; if it rules in favour of the interests of the workers, the people and the country, it will go far and will certainly have a long future ahead of it”, Jerónimo de Sousa added.