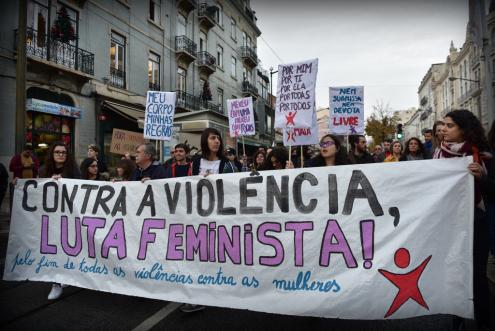 Domestic violence is the crime against people that causes the highest number of deaths in Portugal. It is widely known that the vast majority of domestic violence victims are women, and the number of victims is shocking: since the beginning of 2019, 12 women and 1 child have already been murdered. These crimes are, most of the times, committed based in gender violence.

Nearly two decades ago, Bloco de Esquerda fought for this type of crime to become a public crime, i.e., anyone can and must denounce it. This was a very important step in giving the necessary visibility to aggressions that would never have been known and consequently criminally punished.

However, in practice, the actions of the police and judicial authorities do not properly exhibit the relevance of the denouncements presented nor the seriousness of the crime itself. In Portugal, most of the criminal procedures of domestic violence are filed in their initial phase, and about 90% of the defendants are sentenced to suspended prison sentences. Surviving victims continue to deal with the constant fear that the denouncements and the convictions are not able to eliminate. This is inadmissible.

It is more than urgent to end domestic violence in an effective way and give it its due dimension. Bloco de Esquerda has been developing a series of legislative initiatives that eliminate the sense of impunity for perpetrators, while implementing concrete measures to protect the victims. Among the proposals, we can point out:

In recent times, there have been several debates and civil demonstrations against domestic violence and the International Feminist Strike, scheduled for March 8, will occupy many streets of several cities in Portugal, as in many parts of the world. The major goal of the strike is to advocate gender equality in the different sectors of the society, at home, at work, in public spaces, everywhere. The motivations can be various, but one of the common objectives will be to counter gender violence.

Bloco de Esquerda has been, still is and will always be on the front line of this demand.