Catarina Martins, Left Bloc coordinator, stated that the Portuguese government must have “a strong position condemning Israel’s attacks” and, while holding the presidency of Council of the European Union, take the necessary measures so that immediate sanctions are applied, in order to stop what is happening in the Gaza Strip. 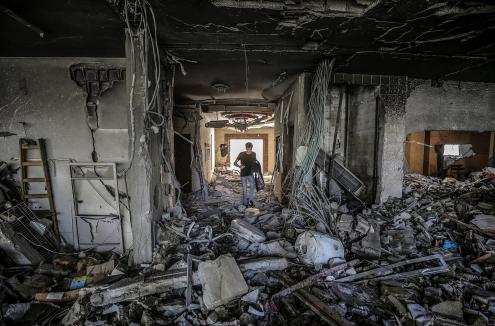 “We are witnessing Israeli bombing of the Gaza strip. They are absolutely criminal acts”, stressed Catarina Martins this Saturday.

While recalling that Israel recently bombed the building where the biggest news agency in the world was located, the Associated Press, along with other chains, the coordinator of Left Bloc pointed out that “bombing the press is the best way to try to hide the massive attack that Israel is carrying out against the Gaza Strip”.

Catarina Martins highlighted that “Portugal has had an unacceptable posture, of an alleged equidistance between Israel and Palestine”.

“What is happening is an unprecedented attack. This is not a conflict, and neither is Israel retaliating against other attacks. We are witnessing acts of war crime against Palestine,” she stressed.

Left Bloc demands that “the Portuguese government must have a strong position condemning Israel’s attacks and, while holding the presidency of Council of the European Union, immediately convene meetings at the highest level for the EU to condemn Israel’s attacks and carry out immediate sanctions to stop what is happening in the Gaza Strip”.

“The world cannot close its eyes and be complicit with Israel’s criminal policy”, stressed Catarina Martins.

Besides presenting two Draft Resolutions, one recommending the Portuguese government to classify Israeli settlements in Palestine as Annexation, and another recommending the Portuguese government to recognise the State of Palestine, Left Bloc presented a Bill with the objective of prohibiting the “import or sale of goods, services and natural resources originating from illegal settlements in territories considered occupied by international law”.
The proposal envisages punishing with a penalty of up to five years in prison for those who import and sell goods from an illegal settlement or contract the provision of services with that origin, as well as extract resources from an occupied territory or its respective territorial waters.

In the Bill’s explanatory memorandum, it is clarified that it “does not intend to implement a boycott of Israeli goods, or even to promote a trade embargo on Israel. Only a ban on the import or sale of goods produced in settlements illegally occupied by Israel is provided for, in accordance with international conventions and resolutions.”

“It is a direct appeal to the conscience of the 230 MPs”, summarised MP Fabian Figueiredo, so that no one in Portugal “profits from colonisation”.

The Bill recalls that the European Union’s position “is absolutely clear” about the illegality of the establishment of Israeli settlements in occupied territories, although the countries then contribute to making these colonies economically viable through the commercial relations they establish with them. “The present conduct of the international community has contributed to deepening the apartheid system existing in the Palestinian territories, preventing a future of peace and democracy that guarantees dignity, freedom and prosperity for the Palestinian people”, states the Bill.