Artigo    /   English    /   What will happen after this weekend’s agreement between the Socialists, the Left Bloc and the Communists?

What will happen after this weekend’s agreement between the Socialists, the Left Bloc and the Communists?

The outcome of the agreement signed is fundamental as much as it is historical: after the horror of austerity, a new page is being turned. By Francisco Louçã.
Francisco Louçã 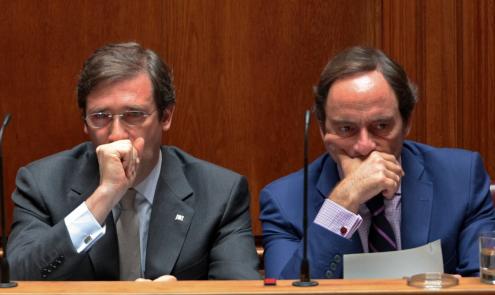 Over the weekend, the Socialists and the Communists signed an agreement. Since the Left Bloc and the Socialists had already done likewise, there is, right now, a parliamentary majority to defeat the briefest government in the history of Portuguese democracy, bringing an end to the Passos Coelho and Paulo Portas saga. The outcome is fundamental as much as it is historical: after the horror of austerity, a new page is being turned.

Over the previous weeks, I have been quite critical of the time it took to close a deal and of its lack of audacity, because two separate agreements – even if they are basically  the same – and three motions for rejection to take down the government mean a choice was made not to come up with a strong statement. But now that an agreement has been reached and it is public, it’s time to focus on its contents and durability, which I shall discuss from the only point of view that matters (to me): how to answer to the social crises exacerbated by the torment of austerity.

I will start with the agreement’s contents.

The agreements that have now been made public came up with an emergency response embodying emergency measures, but did go the extra mile, inasmuch as some of them could become longstanding alternative answers to austerity if there is a will to do so.

The three conditions mentioned by Catarina in her television debate with Costa were, even before the electoral campaign, the starting point for this weekend’s agreement: the SP must drop the reduction of the Single Social Tax paid by the employers, as well as the Single Social Tax for workers whose pensions have been cut; forget the so-called “conciliatory lay-offs” and unfreeze pensions. Faced with electoral results, which left the right wing with no majority, the SP accepted these conditions. And there were plenty of socialists sighting in relief, for they did not support those three ideas put forward by their own party.

But the agreements that have now been made public go further than that — much further than that, actually. They did come up with an emergency response embodying emergency measures, but did go the extra mile, inasmuch as some of them could become longstanding alternative answers to austerity if there is a will to do so.

The agreements stipulate the end of privatisations — there will be no more privatisations. They also cancel the recent processes of handing the urban public transports of Lisbon and Oporto to private companies. They protect water as an essential public asset.

As for labor incomes, which affects millions of workers, public sector wages will be fully restored (in 2016), while wages in the private sector will benefit (those over 600€ due to a reduction in the surcharge, which will be abolished in 2017; the ones bellow 600€ because of a decrease in social security contributions, with no future impact on pensions nor the sustainability of the social security).  Four public holidays will be restored. Bearing in mind that losing them meant workers that to work more hours for the same wages, all workers will be positively affected — all 4,5 million of them.

All pensioners will be better-off (pensions bellow 600€ will be unfrozen and shall see a small recuperation, while those above 600€ will no longer have to pay the IRS surcharge), and that means two million people will be better-off. In contrast, the right wing had vowed to go ahead with a 4000 thousand euros cut in Social Security (1600 millions by freezing pensions, plus 2400 in 600 million a year in benefit cuts, as promised to Brussels). The difference is abyssal.

New fiscal rules will apply: IRS progressivity is restored with more tax brackets; the familiar quotient, beneficial for wealthier families, is replaced by an IRS deduction per child; there is a limit clause for rises in Municipal Property Tax (it cannot exceed 75€ per year) and Corporate Income Tax reductions will come to a halt; the deadline to report company losses will be reduced to five years, instead of the twelve, and new rules will curb fiscal benefits from dividends. Finally, VAT in restaurants will return to 13%.

To fight poverty, the minimum wage will rise to 557€ on January 1st, 2017, and to 600€ by the end of the mandate. Poor families will be entitled to reduced electricity fares. Such measures will benefit one million people.

Measures shall be adopted to make sure false autonomous workers are provided with proper contracts; collective bargaining shall be reinstated; the special mobility regime for public workers, which lead to lay-offs, will be cancelled.

Attachment orders on people’s homes due to public liabilities will no longer be allowed. Mortgage debts will from now on be settled whenever there is dation in payment (that is, the bank keeps the house), if there is no alternative in terms of new deadlines and interest rates.

The list of measures on health and education includes reducing NHS user charges and a textbook exchange mechanism.

The Socialist Party withdrew its electoral law proposal, which included single member constituencies (the “first to pass the post” system used in the UK).

Finally, a parliamentary cooperation proceedings have been agreed, with multiple meetings between the parties, and including setting up committees on external debt sustainability and the future of social security. These committees shall write trimestral reports.

What is thus achieved is stability in people’s lives, relief for pension holders, wage recovery, jobs protection and more fiscal justice. On the other hand, such an increase on aggregate demand will cause an immediate positive economic reaction.

What is then missing?

The agreements lack structural solutions for investment and on how to manage and improve both external and income accounts. Only debt restructuring will enable it; otherwise, there will be no leeway to resist external pressures and launch employment.

The agreements lack structural solutions for investment and on how to manage and improve both external and income accounts. Only debt restructuring will enable it; otherwise, there will be no leeway to resist external pressures and launch employment. It will take investment and promoting the productive capacity, and the State will have to play a strategic pivotal role in reacting to the protracted recession we have been dealing with.

Besides, we cannot yet foresee what the conditions imposed by Brussels, Berlin or the ECB will be, but we know they won’t be favourable. We must keep in mind the statement issued by the European Commission only two days after the elections, which demanded new measures on social security — the subject will remain a matter of dispute. And we must also keep in mind how rating agencies have been threatening the Portuguese Republic. Lastly, the Novo Banco issue [the bank that was created after the bankruptcy of BES and that the government has been trying to sell, unsuccessfully] will blow up before the summer, bringing about wither important losses to the budget balance, demands for recapitalisation or a new bank resolution process, which must be carried out in accordance with technical demands that protect the public welfare and cut down on external debt.

These are the problems that will be knocking on our doorstep over the next months and years. The new majority is quite aware of it, because there is a safeguard clause guaranteeing that no budgetary unforeseen event or situation will lead to higher taxes on labor or lower wages and pensions. The time has surely come to start devising the answers to such unforeseen events and situations, because they will be here before the new Budget.