Esquerda.net/English interviewed Catarina Martins, the Left Bloc’s spokesperson, about the left-wing parliamentary agreement and its political consequences. You can read the interview or watch the video below. The full contents of the agreement between the Socialist Party and the Left Bloc can also be read below. 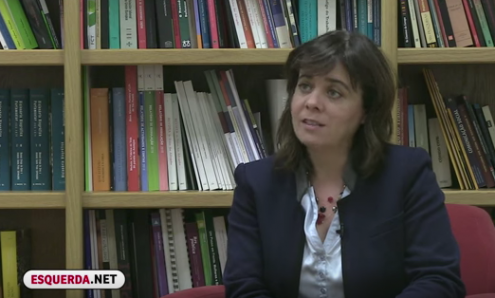 What are the main points of the agreement?

The agreement is based upon three main points. One is to stop the loss of wages and pensions and to start to recover them. The second point is to protect the welfare state and stop privatising all the strategic sectors of our economy. The third point is about collective bargaining; it is about the workers’ rights that were destroyed over these years and now we have a calendar of how to rebuild these rights over time.

In Portugal, the left wing historically does not unite around common struggles. What happened differently in this case?

I think two different things happened. One is that the right is very radical right now, so even the Socialists, who are a centre party that is normally allied with the right, now feel the need, or some of them feel the need, to have other people to talk to; because the rapid destruction of workers’ rights and welfare is something that made an alarm ring in some Socialists’ heads, at least. The other very different thing was the elections, the results of the elections. One million people voted for the left, and wanted a change, but didn’t want to have the Socialists in government again. So now the Left Bloc, and also the Communist Party, are relevant enough in the parliament for us to make an agreement with the Socialist Party. And our views are strong enough to change what the Socialist programme would be if we didn’t now have this strength in parliament.

What were the immediate consequences of the agreement and what is going to happen now?

The immediate consequences of the agreement occur at two levels. One level is the institutional level. Now we have a clear majority in parliament to sustain a Socialist government, a government by the Socialist Party, and we have rejected the programme of the right-wing parties so their government was dismissed. We now do not have a government [at the time the interview was made], and we have a majority in parliament that is supported by the left. The other consequence is at external level, and it has to do with both hope and fear. We have hope from the people who are looking forward to what we are going to be able to change in this country. But we also have fear from the finance sector, the European Union, of what we are going to change in this country. Right now, we have a strange situation in Portugal because we have a stable majority in parliament but the President still hasn’t allowed us to make a government. But I believe he will be forced to do so in the next days.

What are the Left Bloc’s demands that were left out of the agreement?

The agreement stops the lowering of wages and pensions and stops the poverty process that is going on in Portuguese society. But it doesn’t transform, really, the economy. We always have said – and we believe it – that we need to have a public debt restructuring process so that we have the means to respond to basic questions, like giving some kind of support to the more than 700,000 people who are unemployed and don’t receive anything, so they have nothing. Or to be able to increase the lowest pensions, which are below the poverty line, and ensure they keep up with the minimum wage, for instance. Those kinds of questions are not in this agreement. And that is also why this will a government by the Socialist Party with our support in parliament. It is not a coalition government; we will not be in government. There are conditions for stability, because it stops poverty and it protects welfare, but it is not large enough, it doesn’t have the transformation that we stand for, so we cannot be in government.

How does the Left Bloc intend to keep its own agenda?

We will keep on making projects and initiatives about what we believe it is important to do in Portugal. But we have also done something that I think is important. The Socialist Party has agreed to make a government commition to study Portuguese external debt and its sustainability. And that will be important because I think that will give us some technical information about what we can pay and how can we pay it. And I think that is an ongoing debate in Portuguese society. We have voices from the left and the right saying that our debt problem is huge and needs to be tackled. So I think that a working group is technical, but it will also give us some more information and we will make it count so that the problem is not swept away... because it’s there, and it needs to be tackled.

After Syriza’s failed attempt to negotiate with Europe, how do you think PS will act before the Eurogroup and how will the Left Bloc act then?

The programme of the Socialist Party is not a transformation programme, as the first programme of Syriza was. So we are talking about different levels. And the Socialist Party has more allies in Europe, we know that. But we do believe that to be able to regain wages and salaries and to protect welfare we will need to have another position in Europe, and we will need to tackle the debt problem. So, again, I think that the existence of a group to deal with the debt will give us more instruments to be able to deal with the pressure that this government will, inevitably, have from the European Union.

Catarina Martins of the Left Bloc interviewed in English