Marisa Matias presented this Thursday, at the Constitutional Court of Lisbon, 12,000 signed nominations to formalise her presidential candidacy. 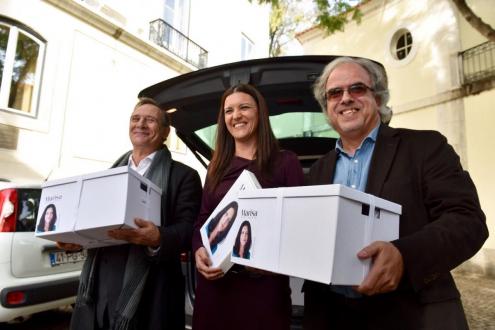 The presidential candidate was received by the President of the Consitutional Court, together with her National Delegate, the actor António Capelo, and the Vice President of the Portuguese Parliament, José Manuel Pureza. When she left, Marisa Matias told journalists that the objective of her presidential bid is to “turn the page of sacrifices imposed by the elites and give a voice and promote talks with the forgotten sectors of society”.

“I think this is the beginning of a new cycle of hope; blackmail and fear will no longer dominate. It is with this spirit of ending a cycle of impoverishment that we are here and I believe that this path will have continuity”, she said.

Sociologist Marisa Matias had announced her candidacy on 7th November, at the Thalia Theatre in Lisbon, but electoral laws of the President of the Republic establish that a minimum of 7,500 signed nominations by Portuguese voters must be submitted in order to formalise a presidential bid.