Artigo    /   English    /   Employment for all: fighting back against precariousness and for social rights in Europe

Employment for all: fighting back against precariousness and for social rights in Europe 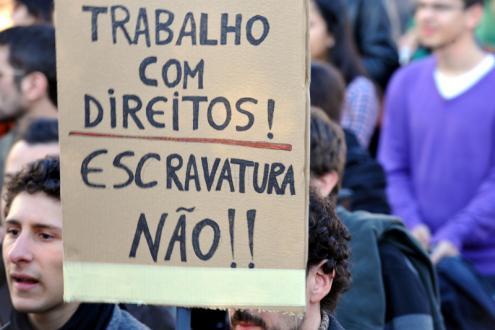 Work with rights! Not slavery!

Recently the European Commission presented its economic and social priorities for 2019, which will lay the ground for the upcoming national reforms and fiscal priorities in each Member State. As a sales pitch ahead of the May 2019 European elections, where social-liberal governments are expected to lose ground in the face of social discontent, the main takeaway of the Commission’s forecast for 2019 is “Keep Calm and Trust in the EU”.

In-work poverty has consistently been on the rise and stands currently at an alarming 9.6% in the EU, while the level of people at risk of poverty or social exclusion remains high. For more than a decade, more than 100 million people in the EU have been living in material deprivation and insecurity. In several Member States, real wage growth is either declining or remains stagnant while the global trend in the EU is that real wage development is trailing behind productivity. Either, the positive economic outlook painted by the Commission is false or the few have simply become richer at the expense of the many.

The explosion of short term contracts,  part time work, zero hour contracts, bogus self-employment and the shrinkage of collective bargaining coverage indicates that the trend in the European labour markets is further losses of traditional jobs over more insecure and exploitative forms of work with unreliable working arrangements. Employers, platform businesses and liberal politicians alike are whitewashing these jobs as innovative and entrepreneurial ‘atypical’ forms of work instead of saying what they really are: Precarious.

For example, since the onset of the crisis in 2008, part-time work has been on the rise and stands currently at 21.2% of all contracts in the euro area. In 2017, there were almost 9 million involuntary part-time workers in the EU. 18 million unemployed, 17% of low-wage earner, 14% on a contract with limited duration and 2% depend on a temporary employment agency. 4% of the workers even have a second job in order to survive. In Member States such as Portugal and Spain, around 25% of the workforce is on a temporary contract of which 80 percent of these are involuntary.

The financial crisis of 2008-2012 provided a golden opportunity for Member States’ governments together with the European institutions to radicalize the commodification of all aspects of life, including labour. In almost all Member States, austerity policies were set up to slash costs on welfare policies and social protection systems. The subsequent social insecurity provided an additional tool to force the workforce into accepting wage suppression and labour reforms aimed at increased flexibility. This “internal devaluation” gave way to the current precarization of labour.

Social protection of workers is considered incompatible with the principles of the “internal market” and the Directives that protect it, in the name of the “freedom to provide services across borders”. The consequences are very real and concrete: wage competition to lower standards, limitation of workers’ right to take collective action, including the right to strike, segregation and division of the labour force inside Europe, promoting xenophobia and racism. There is no respect for employment rights in Europe, no “European Social Model” and no fight against racism unless labour and social rights are placed the rights carried by the internal market.

These labour relations led to an increase of the profit share of the national economies, at the expense of the labour share. Expansion of unpaid labour, intensification of work and domination of the financial capital made the markets more instable, lowered the solvent demand and weakened investments: all of this placed the most important choices of our time (ecological transition, regional development, metropolization…) in the hands of short-sighted private actors. Since then, everyone is paying for maintaining speculative profit rates instead of building a collective sustainable future.

Recently, the Commission introduced the European Pillar of Social Rights in an attempt to show that the European Union is more than austerity and harsh labour reforms. The Social Pillar could be a step in the right direction to recognize the need to address better working conditions and daily lives of ordinary citizens, rather than just focusing on the internal market and the interests of the major private companies. However, it is not enough and the European proposition is furthermore not binding.

A real agenda to fight precarious labour and promote social rights must has also to articulate the struggle for recognition (of segments of the working class without access to collective representation of their interests) with the struggle for redistribution (a change of an economic model in which precariousness is a mean of overexploitation). It has the challenge to broaden the right for a decent contract for everyone and to fight against the growth of precarious forms of contract (such as temporary work, outsourcing, short-term contracts, “false self-employed”); to recognize realities that are often made more invisible (such as intermittent work, domestic work, or scientific work); and to assure the social security rights of independent and self-employed workers.

Fighting back against precariousness and for social rights in Europe is a priority. Fighting unemployment and distributing employment for all is a condition of democracy.

We demand the ratification of the most-advanced ILO conventions and their substitution to EU law when they are more advantageous for the workers.

We want an end the posting of workers directive and empower national parliaments to legislate on the principles applying in their countries for posted workers. Posted workers are not an extension of free movement of persons but are simply a business strategy of cutting labour costs and avoiding obligations in labour intensive sectors like construction, transport and agriculture - and which acts like a sledgehammer to segregate the workforce. Additionally, the free movement of mobile workers should be based in the integration into the labour market of their host countries and be guaranteed the same rights and work under the same terms and conditions as the workers of the host country.

We propose measures against inequalities, the increasing disparity on the share of wealth and against unemployment: to enforce the ban of dismissals in companies which profits; to ensure that the wage is enough to meet the needs of working people, fighting working poverty; establishing maximum proportion between the maximum and the minimum wage inside a company.

We want a non-regression clause, to prevent any national government of lowering the working conditions on the pretext of transposing EU law into national law.

We want new tools to fight informal work and legal transgression, taking into account the huge gap between law in books and law in action, and the need to restore efficient labour inspection staff in our Member-States in line with ILO convention 81 and in cooperation with trade unions. In addition, the Public Sector should be an example in labour practices, both as employer and as customer.

We propose the abrogation of the “Shareholder Directive” and the prohibition of any outrageous dividend pay-outs, i.e. higher than net profits.

We propose new mechanisms of social protection and regulation. Self-employed workers lack social protection and have unfair systems of Social Security deductions. We should create forms of protection for workers who are genuinely in a situation of self-employment and intermittent activity and integrate them into the protective framework of labour law (unemployment protection, paid leave, legal working time).

In Europe, “renting people” should not be a legal business. Temporary work agencies are a particular form of commodification of workers, establishing a business of “renting people”, through the private placement of workers.

Fighting wage compression through the limitation of outsourcing. Outsourcing became, in the last decades, an increasingly popular strategy among employers in both private and public sectors. More and more, it is a perverse mean of “labour placement” disguised as “provision of services” (which should not be legal). At the same time, outsourcing is a strategy of cutting labour costs, of wage compression and of dismantling collectively bargaining arrangements and agreed provisions governing labour relations.

We need to promote strengthening and broadening of collective bargaining coverage and limitation to short-term contracts. Short-term contracts should be severely limited to exceptional situations, such as indisputable seasonal activities or the replacement of a worker in parental leave, for example. All permanent functions/positions should be carried out on the basis of permanent contracts/open-ended contracts. Collective bargaining should be stimulated.