Artigo    /   English    /   Brazil: doing democracy by halves and digging its own grave

Brazil: doing democracy by halves and digging its own grave

Dilma, so different now that the times have changed, can now see that the “wretched democrats who do democracy by halves are allowing the coup that will destroy them." By Francisco Louçã.
Francisco Louçã 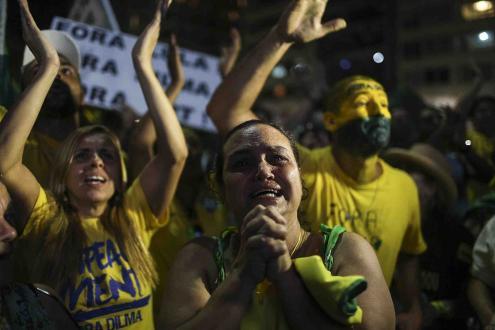 People celebrating the approval of the impeachment process on the Brazilian Parliament. Photo by António Lacerda, EPA/Lusa.

Saint-Just, one of the most prominent Jacobins in the French Revolution, anticipated his own destiny in bitterly saying that the "wretched revolutionaries who do revolutions by halves, do nothing but dig their own graves". Dilma, so different now that the times have changed, can see that the “wretched democrats who do democracy by halves are allowing the coup that will destroy them."

Dilma’s impeachment, which was voted through yesterday in Brasilia, was a land-slide, attacking Dilma Rousseff and the Workers party’s where they were weakest, but also revealing the true nature of Brazil’s political right. And even if it is a bit too early to look back objectively at this long period in which the Workers’ Party has dominated Brazilian politics, some basic trends are evident.

The first is the right-wing parties’ weakness in the transition after the military dictatorship, and especially in the modernization of Brazil over the last two decades. The dictatorship left few viable candidates for presidency, so Fernando Henrique Cardoso, opponent of the military regime and the most prominent figure of the PSDB (the Brazilian Social Democracy Party) stepped up to the plate. The political party sought to combine the European social democratic movement with a liberalism that identified with a financial oligarchy early-on, and was a defector of the intellectual left - so began Cardoso’s presidency, by asking the population indiscreetly to "forget everything I wrote". He himself had forgotten all the times he had spoken out against inequality and dependency. Fernando Henrique was what was deemed presentable. The rest of their representatives, from maharajas and tribal chiefs to colonels and their gunmen, bishops of various churches and loose army men, were a group of colourful characters with no purpose, except to bleed the government dry. The mass of right-wing parties created a web of business alliances and advancement of careers, sometimes in extravagant measure and always to the advantage of the politicians involved.

The only party that stands out from these is the PMDB, the largest party in parliament but the most insignificant in terms of presidential elections, where it has always failed. Brazil has a presidential system of government, which means that the President is elected by popular vote, and then goes on lead the government - which has been shaped with each presidential term. The Workers’ Party made the most of the system in making false alliances, knowing that other parties needed their votes when it came to voting in parliament.

The political right then went on to contribute very little to a country where the land-owning, agro-industrial or industrial, and especially financial bourgeoisie is very powerful and well organized. This bourgeoisie maintained its position by relying on strong media connections, which made use of organic intellectuals and dense legitimation processes, as well as connections with employers' associations, which are a strong voice in society. This meant that the political fragility of the right-wing parties was disconnected from the capital's social power.

It also meant that there was a gap for the Workers’ Party to emerge in the early 1980s, representing a general, popular movement, and absorbing much of the political left (in the early years, in addition to the PCB (Brazilian Communist Party) and the PCdoB (Communist Party of Brazil), the pro-Soviet party, the pro-Chinese and then the pro-Albanian parties, as well as other leftist organizations, for example Leonel Brizola’s PDT (Democratic Labour Party), which has links with the Socialist International and influence in Rio Grande do Sul and Rio de Janeiro) and mobilizing a demanding, forceful trade union. This Workers Party changed the political landscape in Brazil and consolidated its class base, even though it had low numbers of votes to start with.

Lula (president from 2003 to 2011) winning the presidential elections in 2002, after having lost twice in previous elections, changed the game. However, it was then that the Workers’ Party began to change. All the elements converged to shape the Workers’ Party into the government that it was trying to change; having to adapt to having power, the amazement at the political posts and small sinecures, playing the game of party alliances to try to gain a party majority in federal parliament and the Senate in Brasilia, and above all having to accept liberal economic policy and abandon all major social projects such as a land reform or a nationalization of the country’s banks. This period of adaptation led to the corruption of various leaders and officials, even though at times it seemed that Dilma was different.  When large demonstrations in 2013 took over the country, the president promised a referendum to change the rules of a voting system that was constructed to create a corrupt parliament. However, it was too little too late; nothing happened and corruption continued to rule the government, just like the Mensalão scandal (a vote-buying case of corruption against the Workers’ Party in 2005).

It is true that there were many Workers’ Party politicians who fought back against corruption and who made a reform of the political system their first priority. However, those were defeated. The Workers’ Party did not want to wage the political battle that would change the electoral system, which would lead to mobilizing social choices being made and would avoid having to have an alliance with the right and to the policies whose interests have forced the country into decline. 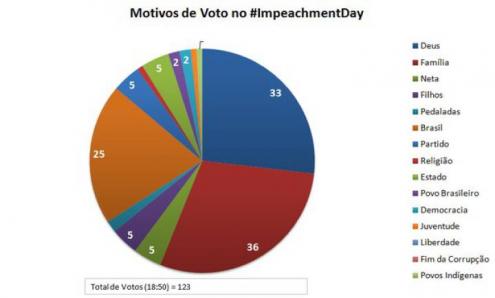 Therefore, surrounded by allies who are in fact its enemies, Dilma’s government has fallen, victim of a false accusation with no legal grounds (the graph shows the statistics of reasons individual deputies had for voting for Dilma’s dismissal, registered at 6:50pm, Brazilian time, source: El Pais, click on the image to enlarge it), simply because the politicians who have committed the most crimes want to save themselves by creating as much chaos as possible (note that in Portugal there have been those who have praised this crowd of officers and deputies, who have court cases against them, as saviours of democracy). That is, Rousseff and the Workers’ Party created democracy by halves and endorsed its worst vices, living in harmony with, if not actively feeding the piranhas, and have now realised that they have dug their own grave.

In all this, we can see the epitaph that has repeated itself throughout history: what really counts, what really mobilizes the right powers at the right time is economic power and the size of the social gap. The public has never trusted newcomers with dubious intentions; the Workers’ Party served the public’s interests when there was no right-wing party that could present a convincing candidate and therefore a comfortable hegemony, but these positions could only be temporary, they would only last until the traditional holders of these roles came back, the only ones who are truly accepted at the table of power. This was the case in Latin America during the military dictatorships, and continues to be the case now that there is a democracy: Lula cannot be in power, he’s too working-class, too unionist, too close to the people; just as Dilma is too suspicious to the elite, even when appointing a liberal to be in charge of Finance or an agribusiness representative to be in charge of Agriculture. Isn’t it like this in Portugal, now that we have seen the visceral outrage (the "ethical" revolt, as it was called at the PSD’s (Social Democratic Party) Congress) because the government ends up being made up of parties who do not have God's blessing to come into power because "they’re not part of the power-arc"?

The right, which had its first victory in Brasilia by voting the coup through, simply wants to return all power to the landowners and rid their government of any politician who is not a “pedigree”. This paradox is what contributes to a political and constitutional crisis, the result of which cannot be foreseen.

Published at blogues.publico.pt on April 18th 2016. Translated by Luci Ruas for Esquerda.net/English.