The President appointed Costa as Prime Minister. He has already announced the names of the ministers in his government. The Left Bloc and the Communist Party have issued comments on the announcement. 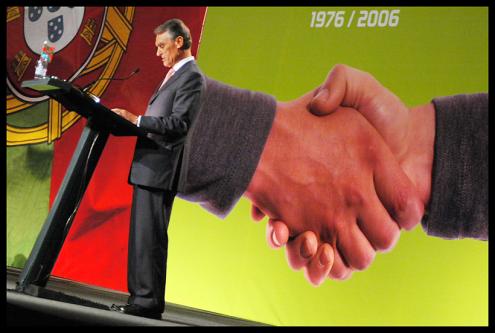 This morning, António Costa, the secretary-general of the Socialist Party (PS), was once again called to a meeting by President Cavaco Silva. After the meeting, which lasted an hour, António Costa did not make any comments, but the President issued a statement confirming he would appoint Costa. Since then, the Socialist Party has already made public the names of the ministers and secretaries of state. There will be seventeen ministers, only four of which are women.
Yesterday, after Cavaco’s meeting with António Costa, the President issued a statement asking the Socialists to explain six items of the agreement with the left-wing parties. The Socialists answered promptly, via a written letter which was delivered the same day.
According to Catarina Martins, the spokesperson for the Left Bloc, the announcement marks "the beginning of a new cycle, committed to recovering people’s incomes and defending the welfare state. Recovering pensions, increasing the minimum wage, putting a stop to privatisations, fighting precarity are at the core of this commitment”.
João Oliveira, the Communist Party’s chief whip, criticised the President’s statement, declaring that “after having created a political crisis by appointing the right-wing government, the President confirmed that he had been trying, right until the last minute, to keep the right wing in power, even considering to keep them on as a Caretaker Government and disrespecting the will of the Portuguese people expressed in the elections.”